A short time ago I received an e-mail from my blogging friend, Angela, at Tea With Friends blog. She and her husband, Alex, were going to be passing through my area, and she wondered if I'd be available to meet them somewhere for lunch.   I was indeed available, but I much preferred inviting them to my house rather than meeting at a restaurant.

The day and time was set, but in the meantime I began concentrating on a few things around the house that needed attention before their arrival. Isn't it funny how we procrastinate doing chores until we learn company's coming, then we spring into action.  We have a cement jockey in front of our house that holds our address. His red coat has needed repainting for months, and my hubby tried to convince me the weather-worn, faded jacket had 'patina'.  Sorry, Jerry, no patina look for the jockey! ;-)   He got a bright new red jacket to properly greet Angela and Alex. 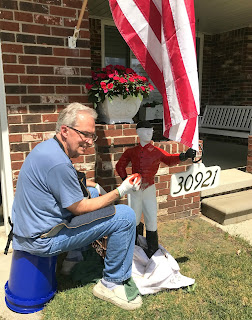 I love the elegant look of silver [actually silverplate at my house], but I don't enjoy polishing it. Prior to Angela and Alex's arrival, however, a few of my pieces got polished.  Company's a good thing in more ways than one!  ;-) 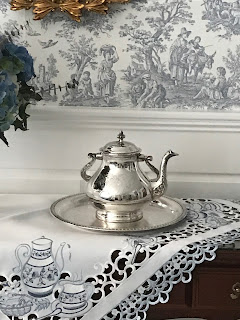 Angela has authored two books that I proudly possess [they're available on Amazon] and she's working on another.  Alex is a writer too. 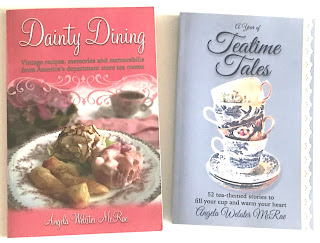 I've had the blessing of meeting Angela on two other occasions, but this was my first time to meet Alex, and he's just as warm and friendly as Angela.  They are kindred spirits, and our time with them flew by. 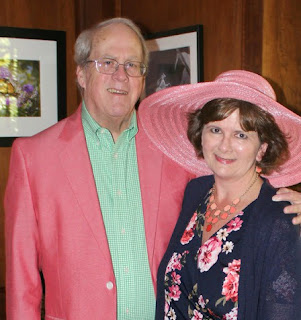 Since Angela loves researching old department store tearooms [which is what her book, Dainty Dining, is all about], I got out my Hudson's cookbook and prepared a lunch she could have ordered 'once-upon-a-time' at J.L. Hudson's tearoom in downtown Detroit. 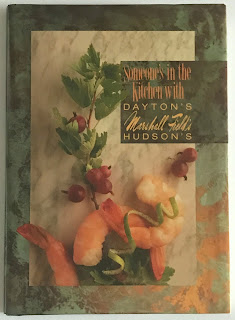 Knowing they were on a limited time schedule, I kept things simple.  No fussy tablescape. 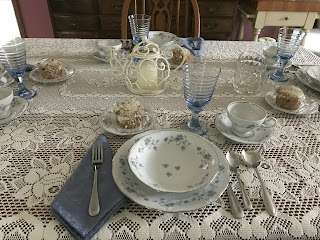 Angela asked if it would be rude if she asked to take pictures, and I told her not at all, and grabbed my iPhone and snapped away too! ;-) We began with a bowl of Canadian Cheddar Cheese soup garnished with a teapot crouton. 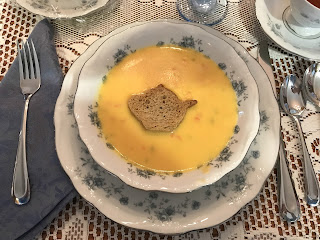 Followed by Hudson's famous Maurice Salad with a Blueberry Muffin, served with both iced and hot tea. 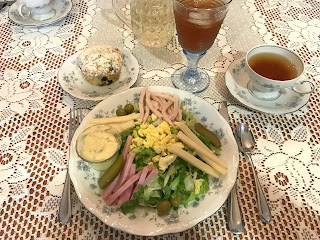 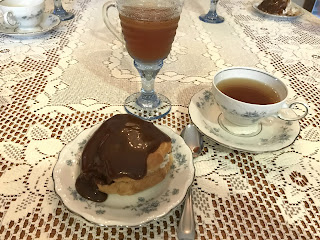 Below is an iPhone photo Alex took, and Angela e-mailed it to me. 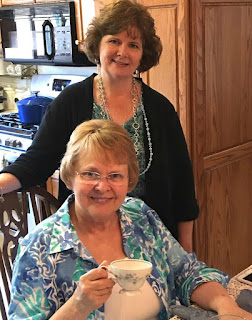 It was their first time to visit Michigan, and I hope they liked it well enough to come back! Jerry and I definitely enjoyed having them in our home.

I'm looking forward to seeing Angela again in Chattanooga, TN this fall when she meets up with us there for the day during the Southern Belle Tea Tour. Hopefully one of my blog followers [who also lives in Georgia] is going to come with her.