Day three began by taking the tube to Kensington High Street, and walking through Kensington Gardens to the Royal Palace. It was a misty morning, but cleared as the day progressed.

The sign below was displayed on the garden grounds. 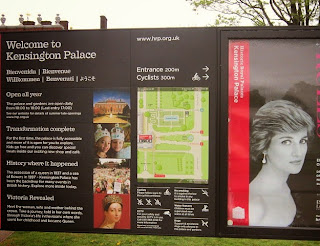 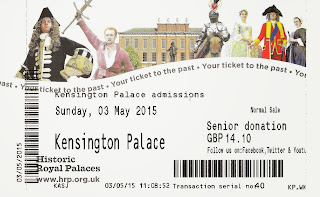 I toured the palace in 2001 and 2007, but the exhibits change, and it was a historic palace I wanted Lori to see, so we returned. The palace was closed for two years and reopened in 2012 after undergoing a £12 million extensive renovation. The recently re-gilded palace 'Gold Gate' [below]. 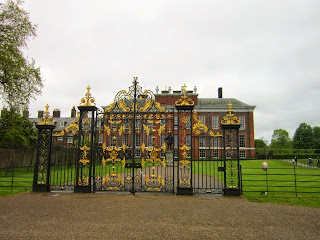 The new little princess of Cambridge, Charlotte Elizabeth Diana, had just been born the day before, and someone tied a pink balloon to the fence, so I took Lori's picture by it. 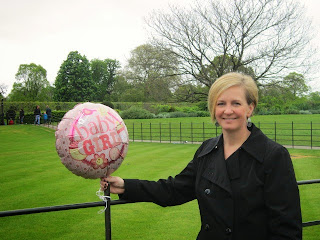 Statue of Queen Victoria sculpted by her daughter, Princess Louise, at the front of the palace. 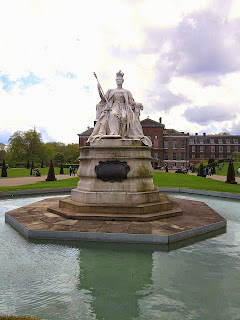 Paparazzi tents with camera equipment set-up ready to get a photo of William and Kate and their new princess. 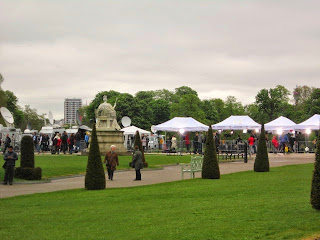 Kensington Palace is divided into two parts - a private wing where royal family members currently live [including William and Kate and their children, and Princess Diana lived there for 16 years after her marriage to Prince Charles], and the Historic State Apartments which are open to the public for touring.  Photography was permitted without a flash.

The State Apartments are the oldest part of the palace, and were created for Queen Mary II and King William III.  They purchased Kensington Palace in the summer of 1689, and had it enlarged and remodeled by Sir Christopher Wren from a modest 17th century Jacobean country mansion [formerly known as Nottingham House] into a small palace. The house was built in 1605, in what was then the rural village of Kensington.

We began our tour with the Queen's State Apartments.  The Queen's Staircase [below], provided access to her private apartments, and was intentionally designed plainer than the King's. The steps were wide and shallow for easy use. The Queen's state apartments include: The Queen's Gallery [which displays Queen Mary II's love for oriental porcelain], Queen's Closet, Queen's Dining Room, Queen's Drawing Room and Queen's Bedroom. 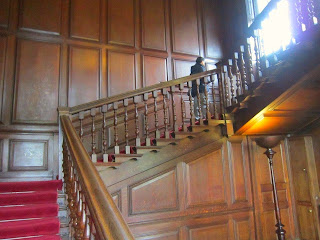 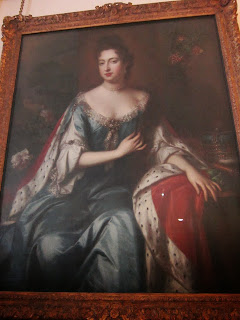 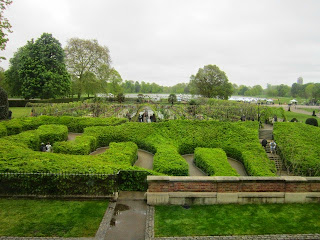 Queen Mary II contracted smallpox and died in 1694, and King William III died in 1702. Upon his death, Queen Mary II's sister, Anne, ascended to the throne. She reigned for 12 years residing in the palace until her death in 1714. Her third cousin, George of Hanover became King George I. During his reign he had the King's Grand Staircase, and three King's State Apartments remodeled - the Privy Chamber, the Cupola Room, and the King's Drawing Room. 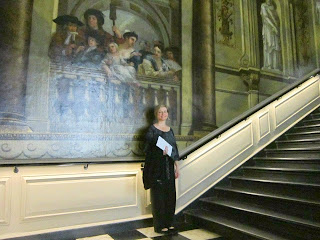 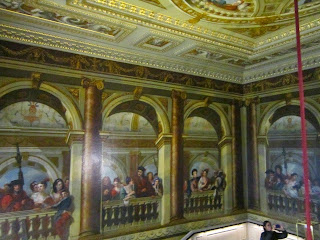 ~ Ceiling of the King's Grand Staircase ~ 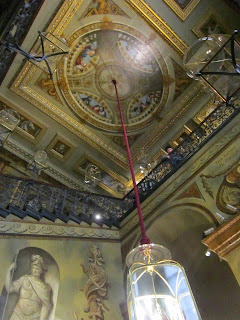 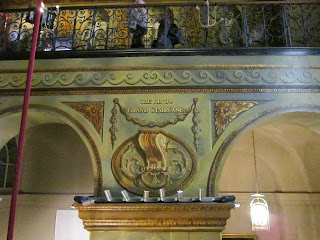 In the center of the Cupola Room - which is the most ornate room in the palace - is a clock and music box that played tunes by Handel and two other composers.  With Roman columns and gilded decor, it was the principal state room of the palace.  Princess Victoria [later Queen] was christened in this room. 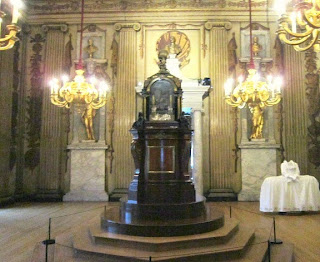 When his son, George II became King in 1727, he and consort Queen Caroline used Kensington Palace for entertaining.  They were patrons of German composer, George Frideric Handel, who taught music to their children. Below are mock-up paper costumes of 18th Century Court Musicians. 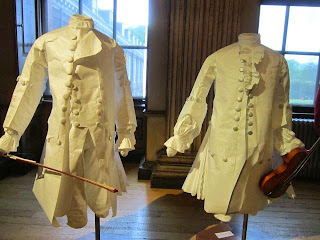 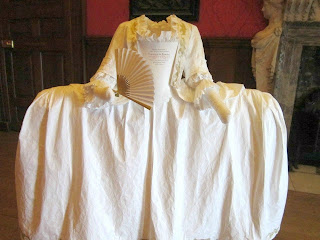 Mock-up paper mantua that 18 year Princess Amelia wore at a ball in the Cupola Room in 1729, where she danced scandalously with the Duke of Grafton. It's been suggested the white costumes on the headless mannequins create a 'ghostly' feel. Perhaps that's what the curator intended??? 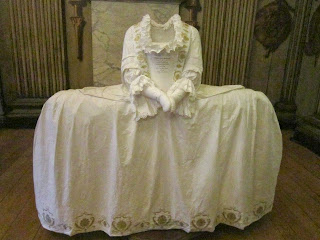 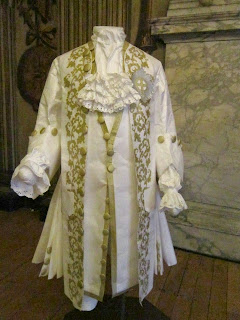 Magnificent balls were held on the King or Queen's birthday, and on the accession to the throne. On these occasions, guests dressed in luxurious-embroidered silks, danced by candlelight.

Pictured below is the "Rockingham Mantua" worn by Lady Rockingham, the prime minister's wife. The extremely wide ornate skirt with floor-length train, was worn over whalebone hoops.  It was the preference of all ladies who attended the Royal Georgian Court even though it was almost impossible for them to sit comfortably wearing one, and walking through doors had to be done sideways. 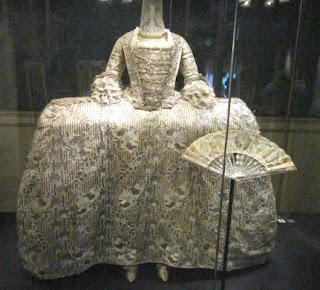 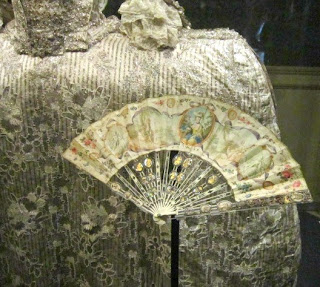 Another fan was displayed with a sign stating fans were an indispensable part of a woman's wardrobe in the eighteenth century.  They were used to cool the owner, as well as shield a conversation for unintended ears! 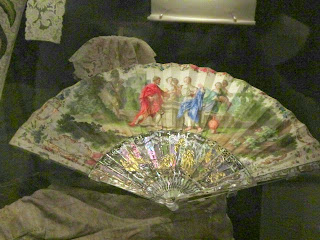 The King's Gallery is the largest and longest state apartment, and looks much the same as it did when it was decorated for George I in 1727.  Some of the finest portraits in the Royal Collection are in this gallery. 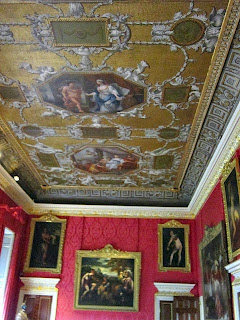 I wondered if the painting below depicted the biblical account of Jesus with the woman at the well?  I didn't purchase a palace guide book, and now I wish I had. 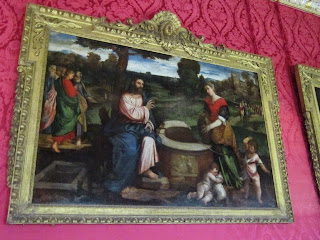 To be continued... 'Victoria Revealed', a current exhibition at the palace.

Posted by relevanttealeaf at 12:00 PM