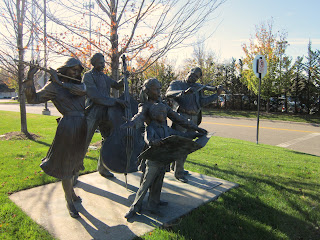 The show is a Depression glass collector's dream! 22 dealers participated with fabulous displays. We arrived at 10:00 a.m. when the show first opened. The admittance fee was $5.00 per person. 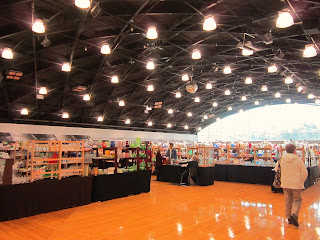 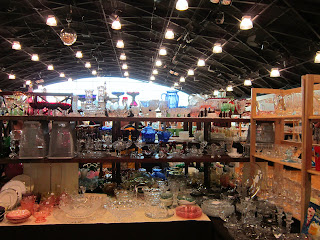 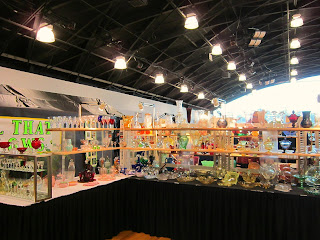 Sandy and I visited all the booths and saw A LOT that we liked, but we didn't make any purchases, with the exception of a new metal top for one of my Depression glass shakers. I wasn't aware replacement tops were available, so it was a pleasant discovery. I should have purchased two because when I got home and unpacked the shakers, I found the top on the pepper shaker was split [probably from being screwed on too tight], and the salt top was corroded.

The dealer said he had about a 40% success rate of customers buying a replacement top and having it fit the shaker. Since it was only $5.00 I decided to take a chance. The new top [far right] has a slightly different shape than the original top, but it fits perfectly. I've already E-mailed the dealer asking to purchase another top. I've read two tips telling how to prevent metal salt shaker tops from corroding or rusting. #1: From the very start empty the shaker after use, and thoroughly wash both the shaker and the top. That way the salt won't have time to do damage. #2: Paint the inside of the top with clear nail polish. When the lacquer dries, re-open the holes using a needle or small nail, from the inside. 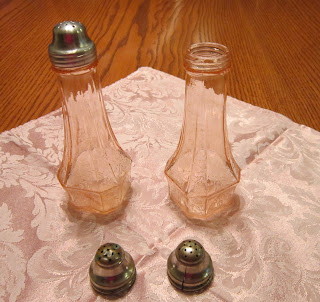 What is Depression Glass? It's clear or colored translucent glassware that was distributed free, or at low cost in the United States and Canada in the late 1920's through the early 1940's.

The Quaker Oats Company and other food manufacturers/distributors put a piece of glassware in boxes of food as an incentive to purchase the product. The glassware was tucked inside boxes of detergent soap also. Movie theaters offered pieces with a ticket to a Saturday matinee, and sometimes gas stations would offer a punch bowl and cups with an oil change. Dime stores were also a common source for the inexpensive, affordable dishware.
More than twenty manufacturers made more than 100 patterns. The mass-produced molded glassware was of relatively poor quality, often exhibiting air bubbles, heavy mold marks and other flaws in the glass, yet it came in beautiful colors and patterns.
Depression glass has been highly collectible since the 1960's. The most popular colors with collectors today are pink, cobalt blue and green. We pay TOP dollar for what was once a free give-away, or cheap bargain!
Popular patterns and pieces have been reproduced, and are still being made today for those who aren't concerned about authenticity.
Below is a photo of a pitcher and water tumblers in the Tea Room pattern that was in one of the dealer's booths last Saturday. 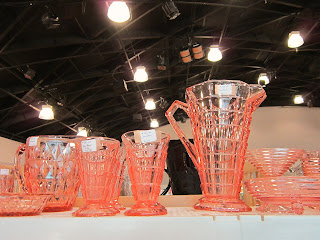 While the oldest tea room in America is said to have opened in 1912 [in Wenham, Massachusetts], many tea rooms came into being in the 1920's spurred by the advent of automobiles, prohibition, and women's quest for independence.

The peak decade for tea rooms was the 1920's, but tea rooms were still around in the 1930's and 1940's, when Depression glass was produced.
How fitting that the Indiana Glass Company came up the the Tea Room pattern which was manufactured from 1925 to 1931. An Art Deco pattern, it was marketed for use in tea rooms, ice cream parlors and soda fountains. Colors made were pink, green, amber and crystal.
Pieces of the Tea Room pattern were rather scarce at Saturday's show in comparison to other patterns, which is why I couldn't resist taking the photo of the pitcher and glasses. If I would have had an "extra" $150 in my wallet, I would have bought it!  ;-)  But I'm happy with my pink creamer and sugar in the Tea Room pattern that I bought at a local antique store earlier this year, along with some dessert plates. 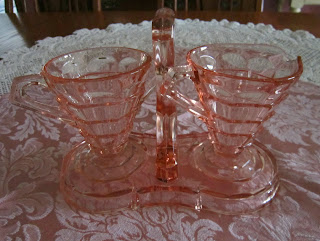 I have it in green too, without the stand.  These are the only Depression glass pieces that I own in the Tea Room pattern [so far!]. 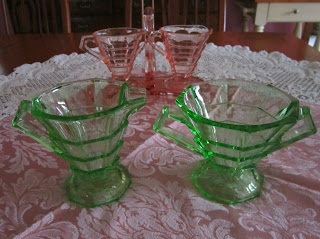 After the Depression Glass Show we went to lunch at Panera Bread.  It was a fun day!