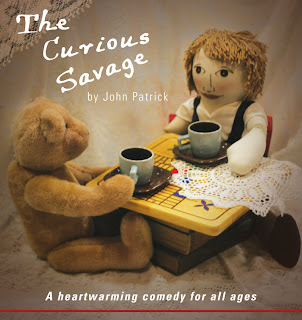 [Internet Program Cover]
The Curious Savage is a comedy play written by John Patrick that opened in New York in 1950.


It's about a lady named Ethel P. Savage, whose husband died and left her ten million dollars [which she wants to use to set up a memorial fund to help average people pursue their dreams].  Her three step-children have her committed to a sanatorium, called The Cloisters, so they can take the money from her.   Unbeknown to the step-children, she stashes the fortune [which is in the form of half-million dollar negotiable bonds] inside a teddy bear that she carries around with her constantly.  Besides Mrs. Savage, there are five residents at the sanatorium, who become close-knit friends.
The play is a contrast between the residents [who supposedly need psychiatric care] and Mrs. Savage's step-children [who consider themselves normal].  By the end of the play it's questionable who the crazy ones really are!  ;-)
My sixteen year old granddaughter, Brianna, portrayed the character of Fairy May - one of the five residents.   Fairy May was a disheveled and messy  lady who believed herself to be stunningly beautiful, and was obsessed with having others love her.
Our family went to see the performance this week, and this proud Nana had to share photos of Brianna, who was awesome! 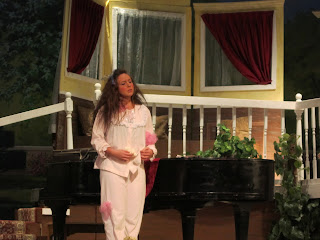 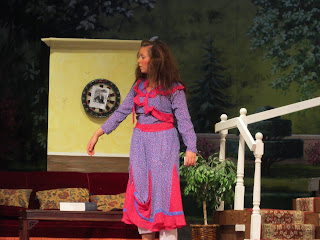 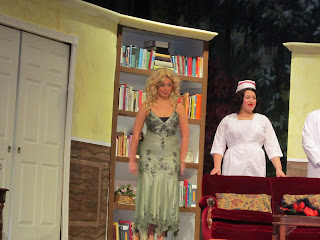 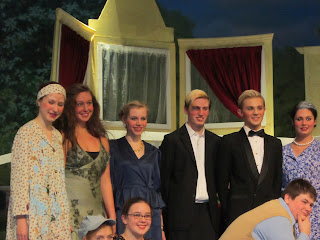 [Cast Photo - Brianna second from left.]
Have any of you seen The Curious Savage? 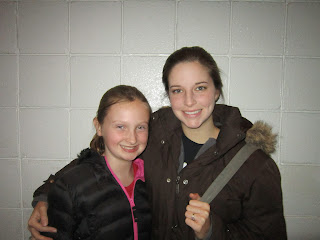 Granddaughters Brooke [Brianna's sister] and Tiffany at Intermission
Thank you for granting me grandmother's bragging privileges!  ;-)  Raising my teacup in tribute to you, Brianna, for a job well done!
Posted by relevanttealeaf at 12:00 AM

Email ThisBlogThis!Share to TwitterShare to FacebookShare to Pinterest
Labels: Play, The Curious Savage