I've been absent from my blog while recuperating from a summer virus.  I'm on the mend now but while I was taking life easy I watched A LOT of YouTube cooking videos, particularly by the Royal Chefs - Graham Newbould and Darren McGrady.  Graham Newbould said the Royals are used to the very best of everything and that includes their food: not too spicy, not too cold [to be hard on their teeth], portions not too small but not too large, simple but elegant, and  no garlic or onions for the Queen.  There is no room for error in the royal kitchen!  The videos were both entertaining and educational and I learned a few tips.

I've had Darren McGrady's cookbook for quite a while, so it was fun to watch videos for some of the recipes in his book. 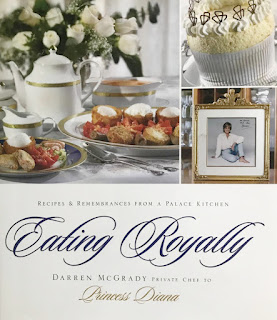 In one of his videos he talked about the movie, Spencer, that came out last year.  I decided to order the DVD and regretted wasting my money.  Have you seen the movie? It's classified as historical fiction, but it portrayed Princess Diana in such a bad way.  She struggled with mental-health issues [depression] and eating disorders after becoming part of the Royal Family, but she wasn't a lunatic as portrayed.  Had she lived, she'd be celebrating her 61st Birthday on July 1st. 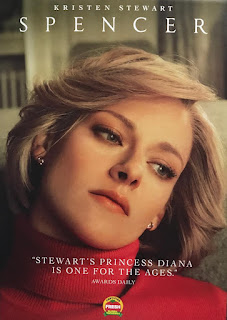 On another subject, I promised I'd share a picture of the rug I ordered for my front porch when it arrived, so here it is.  It's still flattening out after being rolled tightly for shipping, but I'm pleased with it.  Now I need to get a solid black mat for in front of the door to coordinate. Where does it end?  ;-) 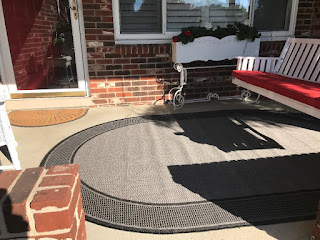 We had lunch with our son, Steve, yesterday before he left on his west coast 40-day sabbatical. He's in Los Angeles as I type this post.
Also in California is our daughter-in-law, Samantha, granddaughters Izzy and Ellie and Samantha's mother.  They had a three day journey by car and arrived early Sunday evening. Izzy began a tennis summer camp at Pepperdine University yesterday.  When it's finished they will drive from Malibu to Escondido, where Izzy will begin her summer intern job. No pictures yet.  Guess that means they're busy and having a good time.
Hubby and I are holding down the fort here in Michigan while everyone is away.
Posted by relevanttealeaf at 7:52 PM