Yesterday, my hubby and I drove to Plymouth, MI to do a presentation about J.L. Hudson's Department Store, at Independence Village.  Jerry goes with me when I do a Hudson's presentation to help carry and set-up all the memorabilia and beautiful oak display case he made.

The presentation was at 2:00 p.m. but we got there around noon so we'd have plenty of time to set up.  I ordered a tee shirt with Hudson's logo in their signature green color from Bygone Retro Tees [an online source] to wear for the presentation, and it got a lot of comments.  It added to the nostalgia. 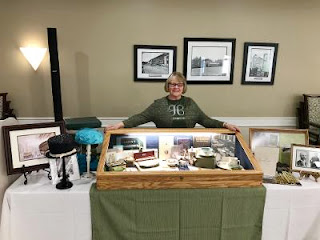 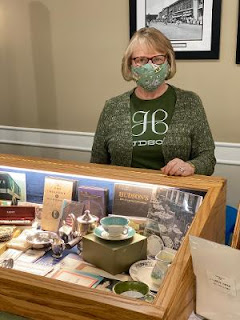 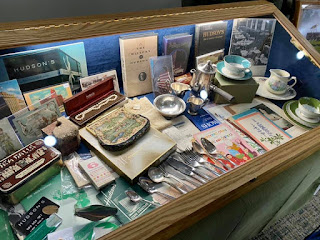 The dining room tables were set up with white linen tablecloths, fresh flowers, and fine bone china teacups and teapots.  I was told over 40 residents signed up to attend.  Most of the attendees were women, but two brave men came.  This is the age group that fondly remembers and appreciated the department store. 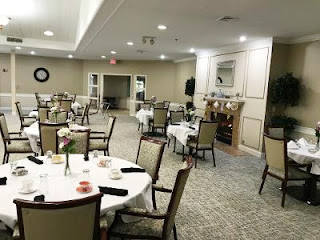 One of the men who attended, and he was a good sport too! 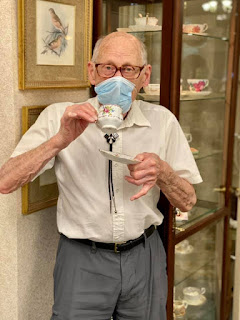 Four of the attendees were former Hudson's employees - one was a store detective, another was a model, and two were sales associates. 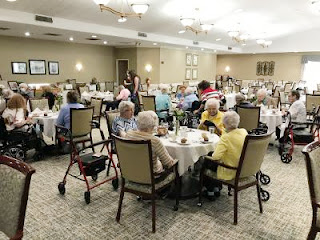 As I spoke, Hudson's signature Maurice Salad, along with a cup of Canadian Cheese Soup [also a Hudson's menu item] was served to the attendees, along with Earl Grey tea. 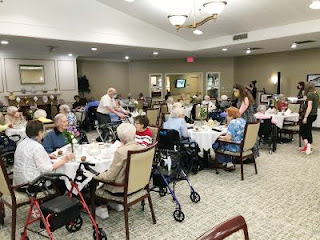 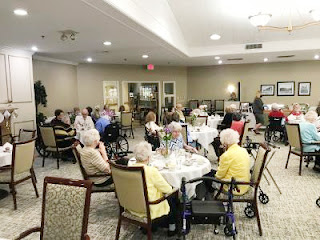 It's a lengthy program [45 minutes] divided into three segments: [1] Hudson's eateries.  I begin with them because they're what spurred my Hudson's research.  After the store's expansion in 1928 there were five major eateries in the store: three formal dining rooms on the 13th floor - the Georgian Dining Room, the Early American Dining Room and the Pine Room, which later became the Beef Emporium.  In 1958 the Georgian and Early American Dining rooms were combined to create the new Riverview Dining Room.
There was also the 2nd Basement Tearoom and the Mezzanine Tearoom.  The basement tearoom transitioned to a cafeteria-style dining room in 1947 and became known as the Breadstick Cafeteria.  Near the Mezzanine tearoom was a Mezzanine Soda Fountain.
The Employee's Cafeteria was on the 14th floor, and there were also quick service areas - snack bars, sandwich cart, and the Pantry Shop with delicatessen items.  You would never go hungry while shopping in Hudson's! 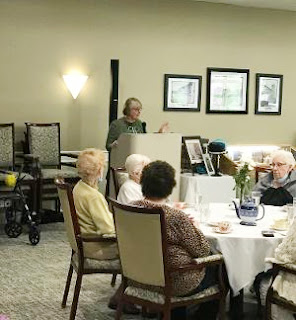 What women might have worn when they dined at Hudson's 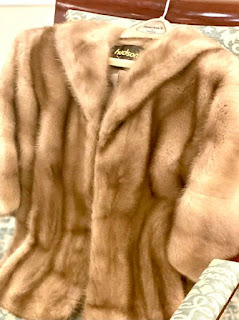 The second segment is about the store's founder - Joseph Lowthian Hudson.  His life was exemplary.  Now that I work at The Whitney I especially appreciate the connections between J.L. Hudson and David Whitney, Jr.
The last segment is about the store itself.  As I shared the many aspects of Hudson's extraordinary customer service, I couldn't help recognizing how far the pendulum has swung in the opposite direction today.  Now there's next to no customer service at any store. 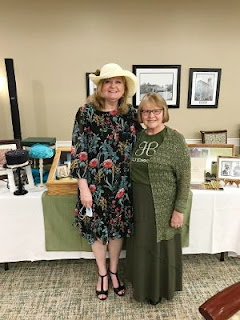 [Debbie Hall, Executive Director at Independence Village]
At the conclusion of the program, several came to me to share their meaningful recollections of Hudson's, but one memory particularly stood out.  A lady named, Carolyn, showed me her wedding photo and the story behind her wedding dress. 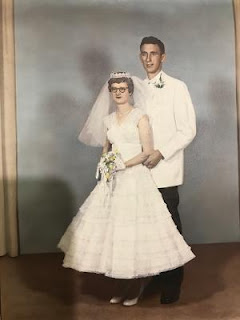 In the spring of 1957 Seventeen Magazine [a magazine for teenage girls] featured a picture of a model wearing a beautiful ballerina-length wedding gown. Carolyn said it was actually an add for Kotex products, but the magazine received so many letters from girls wanting to know who the designer was or how they could obtain a pattern.  Carolyn fell in love with the gown and set her heart on it, and was one of the girls who wrote to Seventeen Magazine.  Hearst Publishing reached out to Hudson's Department Store for assistance.  Hudson's worked with McCall's pattern company, and a pattern was developed.  Then Hudson's devoted a section in their sewing/fabric center with a display of the fabric, lace, pattern and everything else needed to make the gown could be found and purchased.
Carolyn said they lived about three hours away from downtown Detroit, but she and her mother [who was a professional seamstress] made the drive to obtain everything needed for the gown so she could wear it at her June 21st, 1958 wedding.  She said the McCalls pattern got lost over the years, but her gown still exists, lovingly tucked away in a Hudson's suit/coat box like I had on display.  I loved her story and thanked her for sharing it with me. 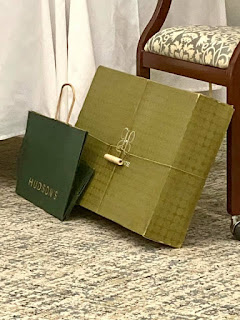 As I was packing up my things to leave, another resident came in with a large numbered, signed, and framed photo of J.L. Hudson's she and her husband purchased several years ago. When they moved to Independence Village, none of their children wanted it and she wanted it to go to someone who would value it, so she gave it to me.  Thanks so much Mary & James! 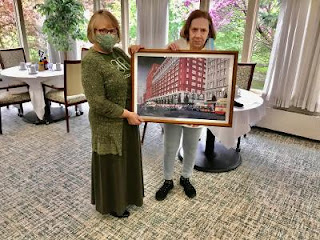 Thanks to all the staff who helped make it a special afternoon for the residents! 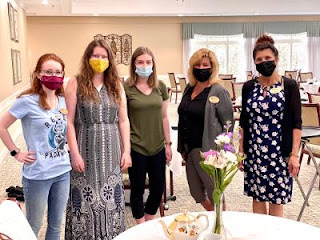 And special thanks to my hubby for giving up most of his day to transport me and all my memorabilia, help set it up and take it down, and be my official photographer, and anything else I needed but forgot to mention.  I couldn't have done the presentation without him.
If you look directly behind and to the left of me, there's a photo of J.L. Hudson's department store that hangs on the wall in the dining room at Independence Village.  That added a nice, unplanned touch. 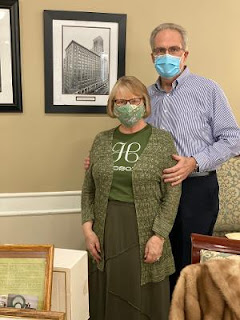 Thank you Independence Village for inviting me to share with your wonderful residents and taking a pleasurable stroll down memory lane with them!

Posted by relevanttealeaf at 2:32 PM