From Tea Dances to Senior Proms

Over the weekend I stumbled upon an interesting AOL article that stated tea dances were the forerunner to today's high school proms.  Really?  It piqued my interest so I researched it for today's blog post.

A Tea Dance is defined as a casual, late-afternoon or early evening dance [from 4:00 to 7:00 p.m.] at which tea is served. Surprisingly, when I Googled images for tea dances, many current photos were provided, both in Europe [London's Waldorf Hilton is best known for them], as well as locations in the United States.

Prom is short for promenade.  Today, the high school Senior Prom is an integral part of the high school experience. While high school yearbooks didn't start including prom pictures until the 1930's and 1940's, proms existed at colleges as early as the late 1800's, and eventually worked their way down to high schools in the early 1900's.  As proms evolved they served a similar function to a debutante ball.

In the early 1900's a prom was a simple tea dance where high school seniors wore their Sunday best, and girls never purchased new clothing for the event.  The occasion called for tea, socializing, and dancing.

In the 1920's and 1930's, the prom expanded into an annual class banquet where students wore party clothes and danced afterward.  As Americans enjoyed the luxury of the post-war economy, the 1950's proms became more extravagant and elaborate.  It was often a time of "firsts" - the first time to take the family car out for an evening, and the first real dress-up affair.  Proms were picture-taking events, similar to a first communion or wedding.  The Senior Prom, which is typically held near the end of the senior year, became the pinnacle event of a high school student's life, sometimes perceived as the ultimate dress rehearsal for a wedding.

My Senior Prom was held in the ballroom of Lovett Hall at The Henry Ford.  It was the first prom in my high school's history to  be held outside the city.  Below are photos of the exterior and interior of Lovett Hall. The ballroom was named for Benjamin Lovett, an accomplished dance instructor, and friend of Henry Ford. 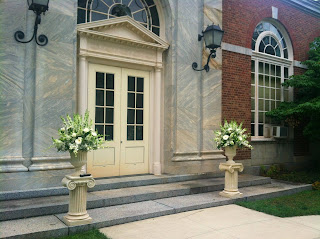 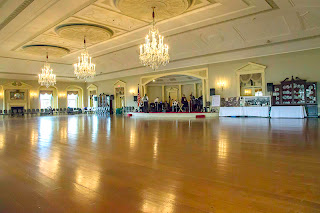 Below is a photo of me and my high school sweetheart, Jerry, who I married! 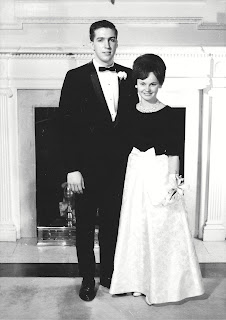 It was the mid-60's, hence the high, up-do hair style!  Those were the days before high school girls could wear strapless gowns or plunging necklines.  Since my prom was in January, the bodice of my gown was black velvet, and the skirt was white brocade.   Always being on the practical side, I had the skirt cut to street-length after the prom, and was able to wear it again for a few dressy occasions.


After the prom we went out to dinner with another couple to an upscale restaurant.  There was no tea imbibed that night, as it was long before I became smitten with tea.  I probably had Coca Cola or ice-water with my meal.

My hubby's first car [a used one] was our transportation for the evening. Renting limos and stretch Hummers for the event was unheard of.

In 1975, Susan Ford, daughter of Gerald Ford, 38th President of the United States, had her senior prom at the White House.  Now that's a venue that's pretty hard to top!

37 years later, here we are again on the other end of the spectrum - chaperons for a senior high overnighter at the Grand Hotel on Mackinac Island. The event was called, "A Night to Remember," and it truly was! 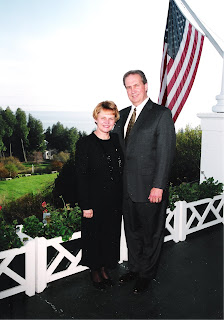 Afternoon Tea was part of this Grand Hotel stay, since by now I had become an avid tea drinker, fully appreciating its virtues! 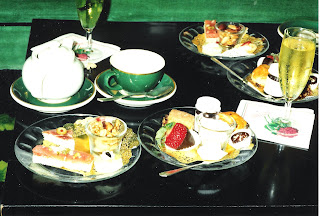 I gasped when I read the 2012 U.S. statistic that an average prom costs a family $1,078!   Yikes!  Tea dances have come a L-O-N-G way, and many a dad's wallet probably wishes they'd return to those simplistic days  ;-)

What are your Senior Prom memories?