Last Saturday, February 2nd, Angela, at Tea With Friends, featured a cookbook she purchased during a visit to Miss. Mable's Tea Room in Dickson, TN.

Unfortunately, Miss. Mable's closed its doors on June 27th, 2009 after 13 years in business. Fortunately, not before I had a chance to visit - twice!  So once again, I'm "piggy-backing" onto one of Angela's posts and sharing the memories from my visits.

It's easy to see why Angela referred to it as one of her all-time favorite tea rooms.  The quaint, 100 year old house [which Fay and her husband restored in 1995 after sitting vacant for 10 years] was indeed lovely, both inside and out, the food was scrumptious, and the retail/gift areas were enough to make a tea lover's head swirl with delight!

My first visit was in March 2002, on my way down to Columbus, Georgia to attend Magnolia & Ivy's tea room training.  Fay Davidson, the owner of Miss. Mable's, was a M & I alumni, so we had talked on the phone and E-mailed each other before my arrival.

The back of the house was used as the entrance to the tea room, and was also the parking area. 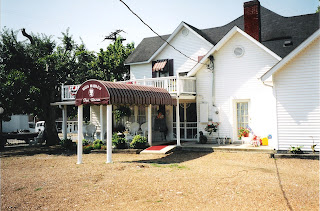 Front of the House 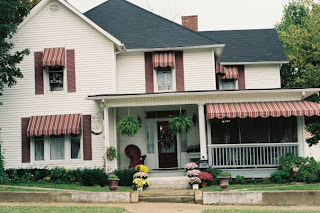 The quaint town of Dickson [with fabulous antique stores] reminded me of Andy Griffith's     Mayberry - reflecting a time when life was slower and simpler.  Miss Mable, by the way, was Fay's paternal grandmother, who lived in Dickson and raised her thirteen children there. Fay wanted to pay homage to her by giving the tea room her name.


This is the table where Jerry and I were seated for Afternoon Tea. 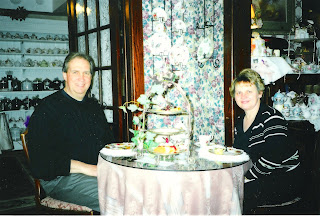 Fay had a couple of Katherine's Collection life-size dolls [5 ft tall] sitting around the tea room, and we just had to have our picture taken with them. 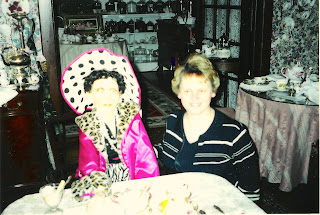 I think their names were Eula and Mae.  How fun! 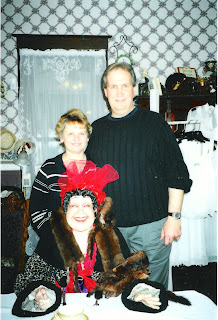 Because Fay knew I was aspiring to open a tea room at the time, she took me on a tour of her kitchen, and was so helpful in answering the many questions that I had.  Her business was a family affair with both of her sons helping out, while her son-in-law was the chef and her daughter helped manage the tea room.   When Fay's granddaughter, Emma, was born, she started coming to the tea room when she was two weeks old!

We returned for a visit in August of 2004 when I was in Nashville for Sandy Clough tea lady training. 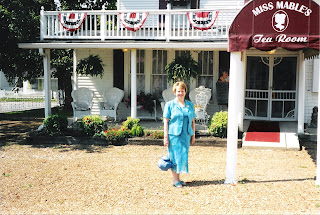 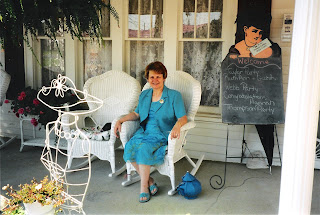 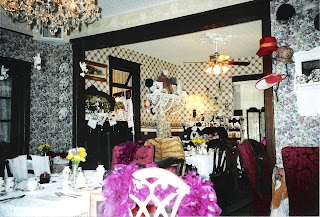 In true Magnolia and Ivy style, Fay had lots of hats, gloves, furs, and boas for guests to wear at tea time if they desired to.

Another fun novelty that could be seen at Miss Mable's was her PT Cruiser with "Driving Miss Mable" written across the back, and at one time there was a large red, fiberglass hat attached to the roof. 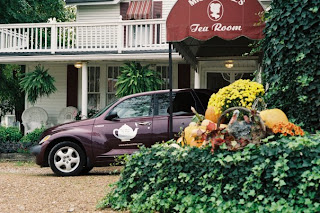 In 2003 Fay came out with a second cookbook which was a year of theme teas which I purchased, as well as the 2004 inserts designed to go in the same binder. 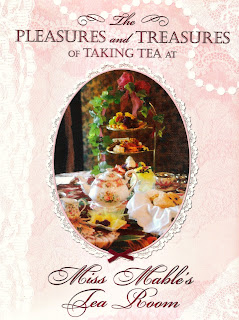 I was sad when I received the E-mail that the tea room was closing, but happy it brought pleasure to so many people.

Thanks for your post, Angela.  It rekindled wonderful memories of my visits to Miss Mable's.