With only two guests coming to Afternoon Tea at The Whitney today, I got the day off and my hubby and I went to see the Downton Abbey movie a second time.  The theater didn't precede the showing with a review of the six series as the advance showing did, but we didn't need it.

After my research on Royal Tiaras, I recognized immediately the tiara Mary, Princess Royal, and Countess of Harewood [portrayed by Kate Phillips on left] wore in the film.  I glossed right over it the first time. 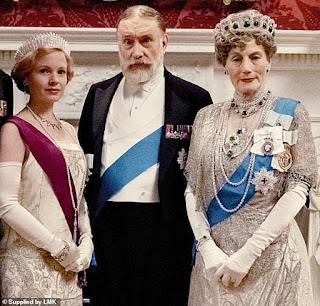 She's wearing a replica of the Queen Mary Fringe Tiara made by Garrard in 1919 from a tiara [that doubled as a necklace] given to Queen Mary as a wedding present from Queen Victoria.  She gave it to the Queen Mother in 1936 and she loaned to Princess Elizabeth and Princess Anne on their wedding day. Just before Princess Elizabeth left for the ceremony at Westminster Abbey, the tiara snapped and the court jeweler had to be rushed over for an emergency repair.

Much like the Kokoshnik tiara, it was designed to look like a fashionable Russian headdress with 47 diamond bars.  Queen Elizabeth, II inherited it upon her mother’s death in 2002. 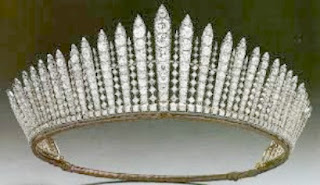 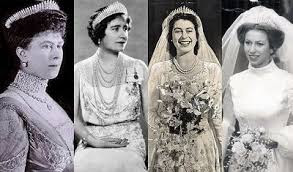 Princess Mary fascinated me because so little is ever mentioned about her.  I enjoyed reading about her life after seeing the movie.

As you can imagine, there were a lot of tea drinking scenes that took place in the movie.

When I went to see the Dressing Downton Exhibition at the Biltmore Estate in 2015, no pictures were allowed [as was permitted at the Winterthur Museum Exhibit], so I bought the costume book. 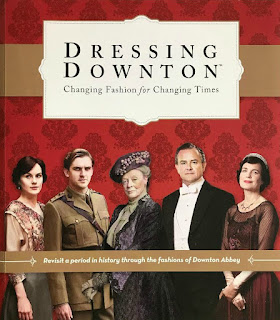 The book states the Crawley women, and other aristocratic women of their time, embraced haute couture.  They would have been attracted to the House of Worth, the foremost fashion house established by British designer, Charles Frederick Worth, headquartered in Paris, with a location in London.

Lady Sybil was attracted to designer Paul Poiret who trained at the House of Worth before branching out on his own.

In the Downton Abbey movie, Queen Mary's dresser said that she trained under Madame Lucile [Lady Duff-Gordon], the leading British fashion designer from 1893 to about 1922. She was an innovator of couture styles, opening her first shop in London in 1893.  She incorporated as "Lucile Ltd." in 1903 and her business expanded with salons in New York City in 1910, Paris in 1911, and Chicago in 1915, making it the first leading couture house with full-scale branches in three countries.  She was the first British-based designer to achieve international acclaim for a global couture brand. 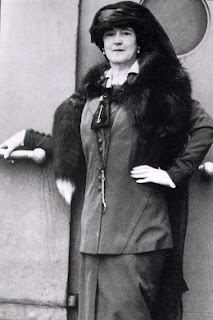 Titanic buffs know she was a first class passenger on the ship along with her husband Cosmo Duff-Gordon, and her assistant.  They survived in Life Boat #1 with only 12 passengers on board. A lot of scandal surrounded their survival, but in the end they were exonerated. Currently I'm reading the book, The Dressmaker, a novel about her - fiction and fact mingled together and I'm enjoying it. 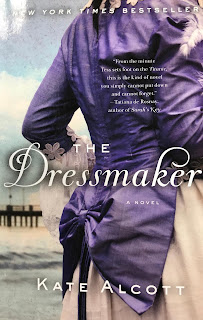 Have you seen the Downton Abbey movie yet?  Several articles have stated that because of its success a sequel is likely.  We can only hope!

Posted by relevanttealeaf at 9:43 PM