It's hard to believe a week has come and gone since the Downton Abbey tea at The Whitney, but my research continues on.   One of the guests suggested I do another tea with a more in-depth program about tiaras and encourage attendees to wear a tiara.  The other guests agreed, so we'll see what transpires.

In the meantime, I'm working on my presentation for the October 27th tea at the assisted living facility and using my research about tiaras for part of the program.

It's said, "Diamonds are a girl's best friend," and there's no other piece of jewelry [tiaras are among the largest pieces of jewelry] that can display more glittering diamonds and other precious stones than a tiara.  I've discovered tiaras are usually given a name, so I'm naming my faux tiara The Whitney tiara or should it be the Downton tiara?  ;-) 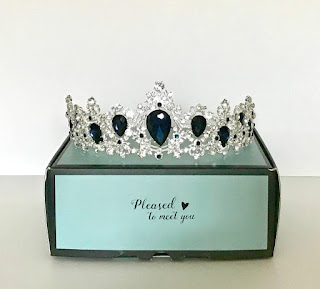 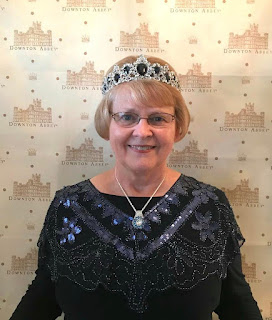 I'm in good company with my choice of a sapphire tiara, because Queen Elizabeth, II has one too [with genuine stones, of course!].  Her's is called The Belgium Sapphire Tiara [but it also goes by the name of the King George VI tiara and the Victorian Sapphire tiara].

When the Queen was married in 1947, her father, King George VI, gifted her with a sapphire and diamond necklace and earrings that were made around 1850. 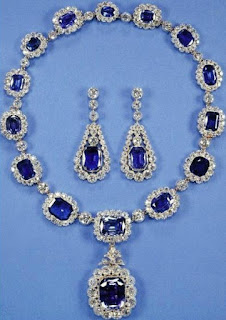 In 1963 she decided to supplement her father's gift with a tiara to match.  She purchased a piece of jewelry with royal provenance - a 19th century sapphire necklace that once belonged to Princess Louise of Saxe-Coburg and Gotha [born Princess Louise of Belgium].


She had the necklace turned upside down and set on a frame and has worn it exclusively as a tiara. She also had a bracelet made to complete her sapphire parure.  She celebrated her Sapphire Jubilee [65 years on the throne] in February 2017. She's the first monarch to celebrate a Sapphire Jubilee. 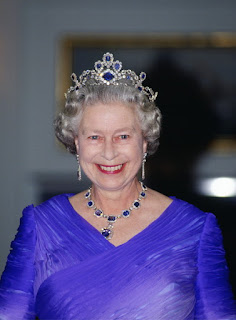 Queen Elizabeth is said to have the largest and most valuable collection of tiaras in the world. It includes tiaras inherited from generations of her family, tiaras she's purchased/had made, as well as those given to her as gifts.  I did a Google search to see how many are in her personal collection.  I came up with 18, but that's probably not conclusive.  She also has coronets and crowns/diadems, but they're in a completely different category than tiaras.  A crown is not jewelry, rather regalia associated with sovereignty and nobility.  In the strictest sense only sovereigns and their female consorts wear crowns.

Queen Elizabeth, II's paternal grandmother, Queen Mary of Teck, adored tiaras and couldn't get enough of them. I read she wore a tiara every night for dinner even when she and King George V were dining alone.  Queen Elizabeth inherited several of her tiaras including the Vladimir Tiara that actress Geraldine James wore in the Downton Abbey movie when she portrayed Queen Mary. 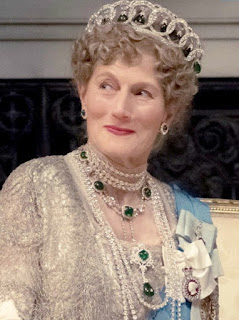 The tiara used in the movie was painstakingly replicated since the Queen's original couldn't be loaned out!  ;-)  It is said to be one of her favorite tiaras.  The Vladimir Tiara is a Romanov Jewel that was supposedly smuggled out of Russia after the Revolution by being concealed in a bonnet.  It was commissioned by the Duchess Vladimir.  When Queen Mary acquired it she decided it needed some repair and refurbishing.  She had it redone so that 15 pearls could be interchangeable with her Cambridge Emerald drops that belonged to her grandmother, or it could be worn plain without the pearls or emeralds.  Queen Elizabeth has been seen wearing it all three ways. 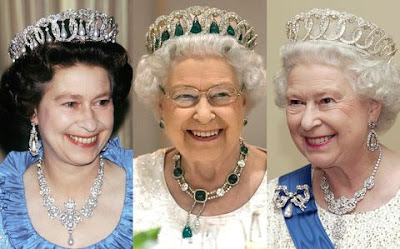 Today anyone can wear a tiara, but tradition and etiquette dictates only a bride or married woman should wear a tiara.  The tiara was seen as an emblem of the loss of innocence to the crowning of love.

Family tiaras represented 'old money' since they stayed within a family and were passed down from one generation to another.

I'll never own a real tiara or crown in this life, but Scripture says there are five Heavenly crowns that believers can receive in Heaven:  The imperishable crown, the crown of rejoicing, the crown of righteousness, the crown of glory and the crown of life.  These crowns won't be worn as symbols of wealth, status or achievement, but rather to lay at the feet of Jesus in worship.  I pray my earthly life will be lived for Him in such a way that I can receive at least one crown to lay at His feet.  I'd rather have one of those crowns than one that has to be locked in a vault for safe keeping, and left behind after death.

Enough about tiaras and crowns for one post.  To bring this around to tea... I drank two large cups of Harney and Sons Molly Brown's Special Blend while typing this post and it was good!  ;-)

Posted by relevanttealeaf at 4:40 PM