Downton Abbey Tea at The Whitney

The Downton Abbey tea that I had the pleasure of planning and executing at The Whitney restaurant in Detroit has come and gone.  Today I'm sharing highlights of the event which will be divided into two posts.

We had 18 attendees and it was held in the Music Room on the 1st floor of the mansion.  I was fortunate that I only had to work one day last week, so it gave me most of the week for preparation, and what a busy week it was!

My first project was to get the gift bags made.  The Director of Operations advertised on the website that every lady would receive an 'exquisite' gift bag.  I told him he set the bar pretty high for me to attain.  I don't know if the guests thought they were exquisite, but I was pleased with the way they tuned out.  I ordered Downton Abbey fabric back in 2014 knowing I'd use it for something some day, and this tea turned out to be the something.  My hubby set up a spot for me on his work bench in the basement to make them.  As you can see, I cut out portions of fabric containing the graphic of Downton Abbey [Highclere Castle] so I could spray glue them on the front of the gift bags. 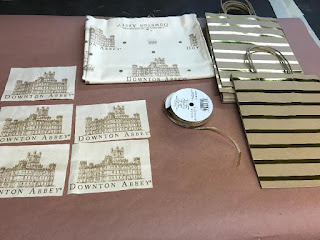 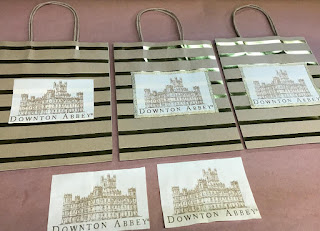 Then I glued gold glittery ribbon around the graphic to frame it, and in each corner I glued a gold rhinestone.  The bags contained a hand fan in a gold nylon bag [Lady Violet carried a hand fan in the beginning of the series], a 1 oz. bag of Whitney's Lavender Rose black tea, and an event program.  I made 20 gift bags and gave one to my boss when he returned from vacation yesterday. 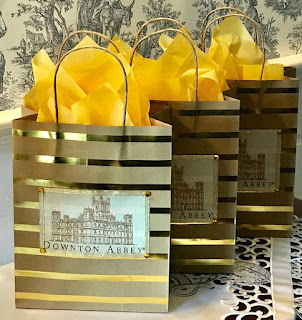 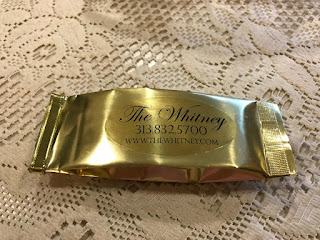 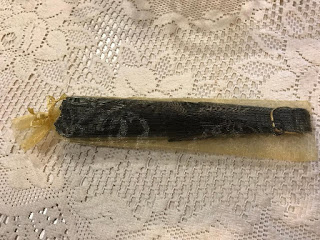 The fans came from Dollar Tree - an item they brought in for Mother's Day.  I had to go to a few stores to find enough, but they are a nice quality.  The nylon bags came from Oriental Trading [an online business].

Originally I wanted to attach this photo of Lady Violet to the fan, but since it was a paid event and the photo is copyrighted, I decided I better not. 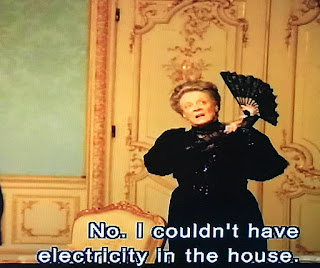 I designed the program and it's content, and the Event's Manager at The Whitney formatted it and printed it in-house.  Then I brought it home to assemble for the gift bags.  The photo of Highclere Castle is one I took when I visited England in 2015.  The 'watercolor' background [on the right edge] is from an 1894 sketch of the Whitney mansion that I found in the Detroit Free Press archives right after the Whitney family moved into the mansion.  More of the sketch is visible inside the program booklet. 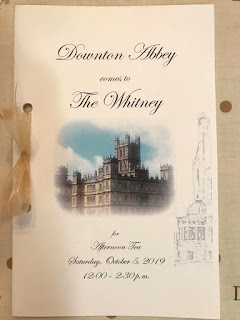 Below, the gift bags all set up in the Music Room waiting to be given out.  I greeted each guest as they arrived and handed them their gift bag. 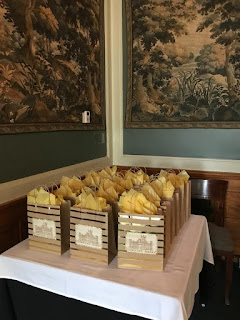 The next project was folding the napkins into roses.  They were a bit of a challenge because they're stiff, commercial grade napkins and larger than linen napkins for home use, but I think they still resembled a rose. 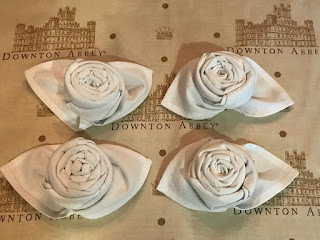 I wanted fresh flowers on the table just like the Crawley's would have had.  In an effort to keep the cost down I made my own arrangements.  Finding just the right height and size vases was a challenge too.  When I couldn't find what I wanted in the store, I reverted to scouting out Salvation Army thrift stores.  It required going to three different thrift stores to find identical ones, but I happily found them.  What are the odds?  The only answer was the dear Lord was smiling down on the event. I do believe He cares about the little things in our lives as well as the big things.  In the photo below my hubby is spray painting them gold. 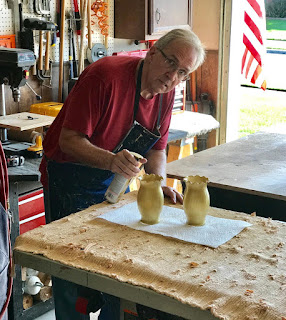 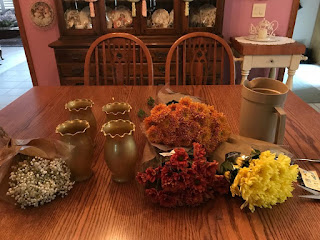 Below are the vases after the flowers were divided between them.  This photo was taken before they were completely finished, because I went back to the florist shop to buy ferns and a little more babies breath.  The one on the right was completely taken apart and reassembled.

I made four squares from the Downton Abbey fabric to sit underneath each vase on the tables.  The floral arrangements doubled as prizes to be taken home. 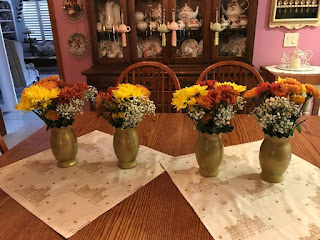 My program was mainly about Downton Abbey tiaras which are technically classified as jewelry, but it included other accessories such as gloves, hats, and necklaces.  I also outlined the daily responsibilities of a lady's maid.  I recycled the framed poster I used earlier to advertise the tea in the restaurant, and made it my display poster with photos of all the Crawley ladies wearing their glittering tiaras, plus the actress [Geraldine James] who portrayed Queen Mary wearing a repro Vladimir Tiara.  The original happens to be one of Queen Elizabeth, II's favorites. 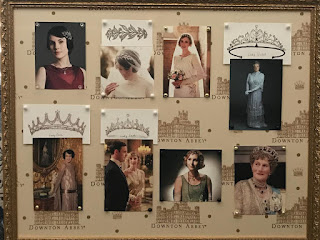 Two uses for the price of one!  ;-)  And I definitely made good use of the Downton Abbey fabric.  It helped tie all the visuals together and carry out the theme - from gift bags, to display board, to tablescape. 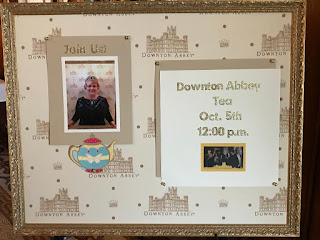 I contacted the Detroit PBS station to see if they had any stand-up figures of Downton Abbey characters and they had Lady Mary and Mr. Carson.  Nothing against Mr. Carson, but I preferred Lady Mary! ;-)  They graciously allowed me to borrow her for our event, and even delivered and picked her up.  The guests enjoyed having their photo made standing next to her. 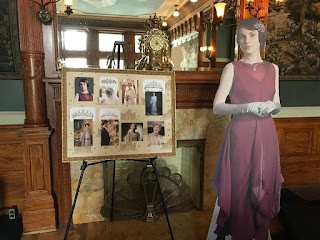 I got permission to go over to the restaurant on Friday evening after most of the guests had left [10:30 p.m.] to set up.  That's normally a job for the bussers, but I'm picky and wanted to be involved myself.  I felt better having everything in place Friday night rather than waiting until Saturday morning.  Experience has taught me the more you can do in advance the smoother things will go the day of the event.

Below is a photo of the table after we finished setting up.  I brought my own amber Tiara teacups and saucers from home because I wanted everything to match, and four of my silver plate teapots.  There were two tea choices - a gentle Earl Grey and The Whitney signature Garden Blend - a very popular tisane of hibiscus, rosehips, Egyptian chamomile, ginger, peppermint and cinnamon.  A pair of teapots were near each end of the table containing both teas. 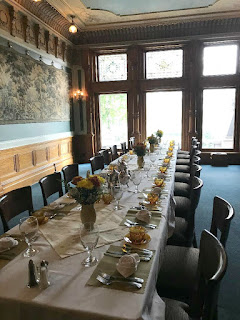 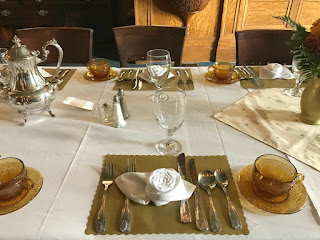 Then it was home for the night to rest up so I'd be perky and bright for the tea at 12:00 o'clock on Saturday...  Next post.

Posted by relevanttealeaf at 9:06 AM