My fourth-born grandchild, Brianna, is celebrating her 23rd birthday today.  Though many miles separate us - she's in Nashville, Tennessee working on her Master's Degree - she's close in heart.  Happy Birthday, Brianna!  Raising my teacup to the only one of my grandchildren who drinks tea on a regular basis.  Must have had something to do with those coordinating leopard outfits early on!  ;-) 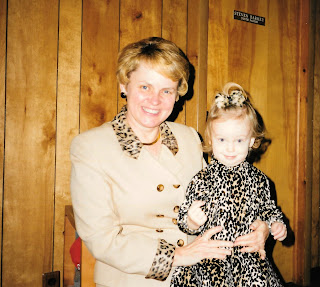 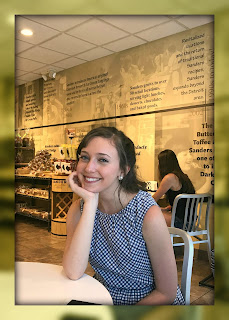 Today's a belated acknowledgement of a nationally celebrated day in England yesterday, National Cream Tea Day.  Four of my blogging friends blogged about it, but my post was already up yesterday when I discovered the notable day.

There was no time in my schedule for baking scones yesterday, but a local tearoom bakes them and distributes them to several food stores, so I purchased a bag and celebrated along with England in my own dining room. 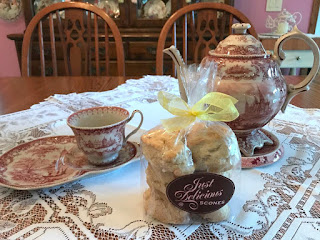 Since I just purchased a tin of Lemon Ginger green tea, I opted to buy lemon scones to go with it. 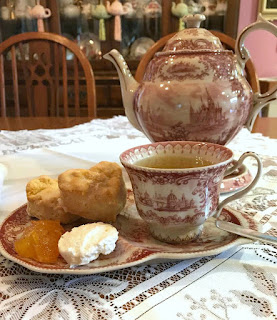 What is a Cream Tea?  Well, it's not stirring clotted cream into your cup of tea.  It's tea taken with scones [usually two] accompanied by clotted cream and jam.  It's a lighter version of Afternoon Tea usually enjoyed earlier in the day, but it can be enjoyed anytime. They've been enjoying it in the UK since the 11th century.

Clotted Cream is thick cream made by allowing unpasteurized cow's milk to sit after heating so the cream rises to the surface and clots.  It's skimmed off and used on scones, fruits, and desserts.  It has a minimum of 55% butterfat.  It may not be great for your arteries, but it's sooo good on scones!  It originated in England's two southwest counties of Devon and Cornwall.

The Queen, according to former Royal Chef, Darren McGrady, prefers jam first topped with clotted cream.  In reality, it all comes down to personal preference.  It's delicious either way!

Cheers to the British for their wonderful traditions!

Posted by relevanttealeaf at 9:22 AM