Saturday, before I left for Chelsea where my youngest son lives, the postman delivered a couple more packages.  Back in July I ordered a Kate Spade tea themed necklace, and this is its sequel. Isn't it cute?  The top four teacups are moveable.  It's a brand new item from eBay and was only $32.99 with free shipping. 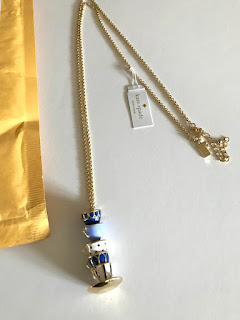 The earrings are a combination of the two necklaces and I ordered them today - $20.89 and free shipping [same e-Bay vendor].

Below is the tea themed necklace I ordered last July.  Its chain is a little different from the teacup necklace.  I like to wear tea themed jewelry when I go to work. 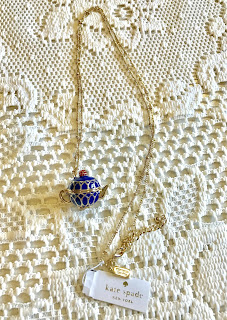 I also received a book I ordered about the Whitney family and their home, now made into a restaurant.  It has a long-standing reputation of being haunted.  The mansion is featured on the cover of the book.  I ordered it in hopes of learning more about the family's history, not  haunted stories and paranormal activities [of which I've experienced none while working there]. 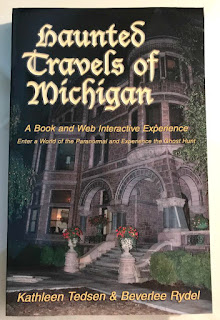 Last but not least, the March/April issue of Tea Time magazine arrived in the mail too.  February isn't here yet and we're looking ahead to March/April already.  But I love that spring-like cover.  It's a reminder that our cold winter months won't last forever. 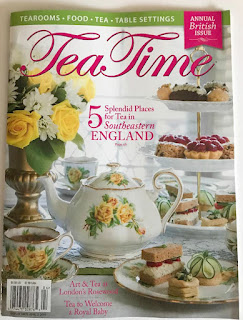 It was a clear day for my drive to Chelsea last Saturday.  I was eager to join Jerry and see the grandkids.  My hubby went Thursday afternoon to relieve the kid's maternal grandparents from their babysitting shift.  While there he's been diligently working on a new glass backsplash as a surprise for Samantha.  Below is the craftsman in action. 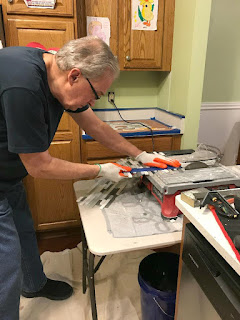 Sunday morning I was back on the road again.  I had to return home to give my presentation at the monthly tea at the assisted living facility.  It had snowed during the night [a storm to precede the big one we got today], so I had to allow plenty of time to get home.

Jeremy and Sam live in a rural part of Chelsea.  There was no traffic on their road when I left, so I stopped to take a picture of the wintry scene from my car windshield/window. 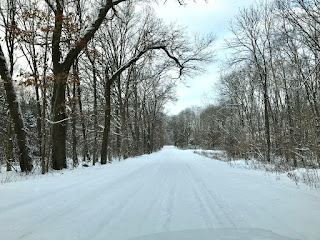 Below is a photo taken in front of the assisted living facility later in the afternoon.  We didn't get as much snow as they got in Chelsea. 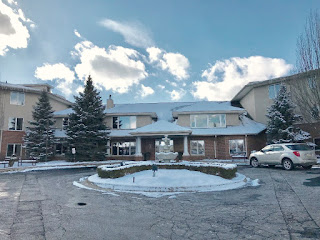 11 ladies and 1 gentleman attended the tea along with the staff.  The program was about Edsel and Eleanor Ford - Auto pioneer Henry Ford's son and J.L. Hudson's, [the founder of Detroit's iconic department store] niece.  The residents were so responsive because Edsel and Eleanor lived locally [though deceased for many years].  They had toured their mansion, and read about them many times in the Detroit-area newspapers.

Photo of the residents sipping their tea and chatting while waiting to be served their pastries before the program began. 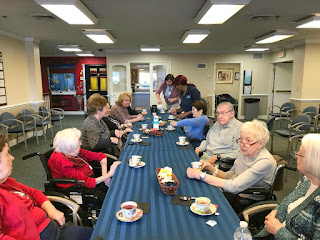 There were no tea reservations today so I had the day off.  Everyone wanted to stay close to home where it was safe and warm.  Jeremy and Samantha returned from their trip to Hawaii and California, so Jerry's back home tonight.

He finished the backsplash and took some photos of the finished project to show me.  Now I'm ready for him to install one in our kitchen!  ;-) 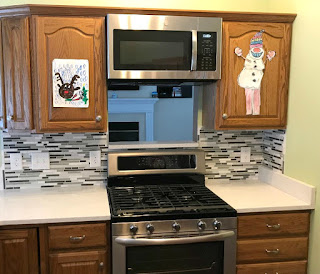 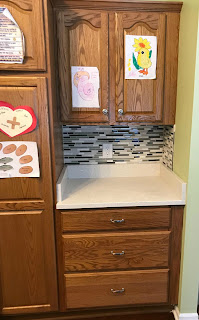 That's Ellie's artwork adorning the cupboards in the above pictures. ;-)  Izzy took a video of her mom when she saw the backsplash for the first time and sent it to Jerry.  She was thrilled with her surprise.  The grandkids are happy to have their mom and dad back home again, and I'm glad Jerry's back home too!

Posted by relevanttealeaf at 10:32 PM