Now that I'm working I miss a lot of things on Facebook, but I happened to see a post in a group I belong to [Afternoon Tea Across America] on Monday, January 7th, from one of the members stating it was National Bobblehead Day.  She posted a photo of her favorite bobblehead - Queen Elizabeth II.

Prior to January 7th, I've never owned a bobblehead.  I've seen a lot of cute ones but have never been tempted to buy one.  This one of Queen Elizabeth II with her Corgi, however, was the exception.  It's so cute and realistic that I Googled to see if I could find one.  I found it at Amazon and Ebay, but the most reasonably priced one was at Fun.com.

Since I've done a few presentations about the Queen's life, I had to buy it.  It was reasonably priced at $17.99 [plus shipping].  The postman delivered it this morning before I went to work. 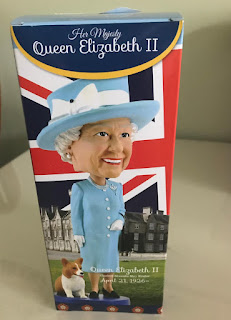 There she stands on my bookshelf amidst some of the books in my collection written about her.  I smile everytime I see it. 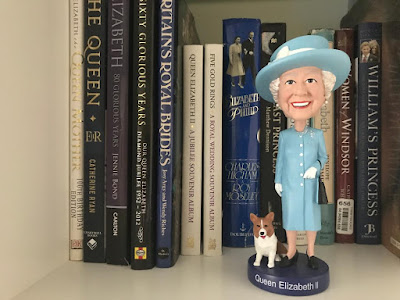 The box even had a little bit of history about the Queen printed on it. [Click on picture to enlarge for reading.] 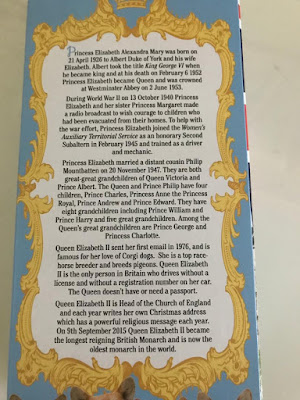 Do you own any bobbleheads?  Did you know a National Bobblehead Day existed?  Live and Learn!  Lifting my teacup in tribute to the Queen!  Long may she live!  Hopefully she'll be blessed with continued good health and exceed her mother's age.  The Queen Mum died five months short of her 102nd birthday.  Queen Elizabeth II will be 93 on her April 21st birthday.

Posted by relevanttealeaf at 8:45 PM