There are only four days left of the trip to blog about.  I hope you've enjoyed traveling along vicariously.  Day #7  began with with a lovely breakfast at the Ballastone Inn.  Guests sign up for a designated time the night before, along with their menu preference. 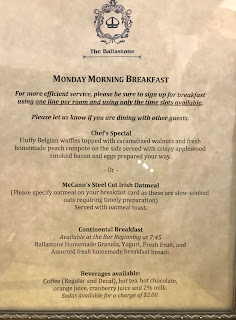 Jerry - Our wonderful bus driver, valet, photographer, and my hubby! 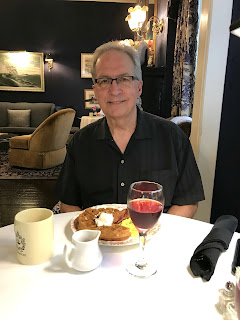 Group member, Ann, took the picture of Jerry and me and had it enlarged and framed and sent it to us when we got home.  Thanks, Ann! 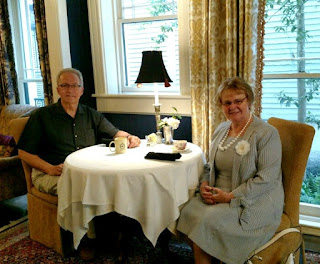 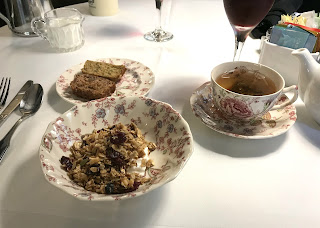 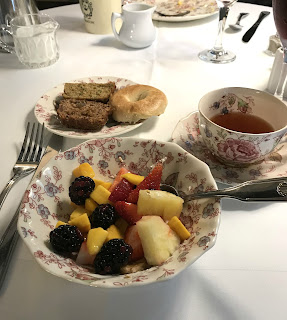 With full tummies we checked out of the Bellastone Inn [our second night in Savannah was at the Hampton Inn also in the Historic District], but before we departed we took a group picture on the front steps. I can't praise this Inn enough.  If you're planning a trip to Savannah, consider staying at the Bellastone.  You'll be glad you did! 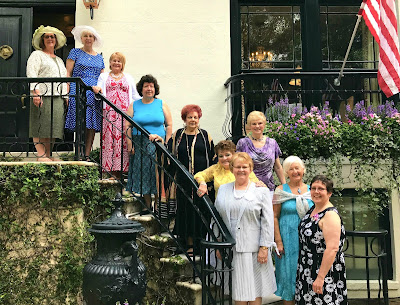 Monday was a full itinerary, with our first stop at The Tea Room, located in the E. Shaver Book Seller, 326 Bull Street on Madison Square, in downtown Savannah.  They sell fine loose-leaf teas and tea equipage.  Isn't a book store a great place for a tea shop?  It reminds me of the quote by C.S. Lewis "You can't get a cup of tea big enough or a book long enough to suit me." 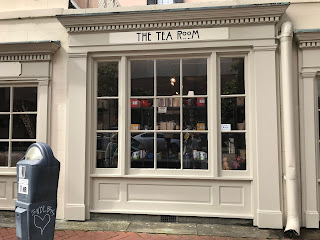 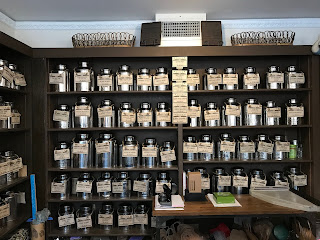 It was fun to browse around the shop and look at the unique décor and merchandise. 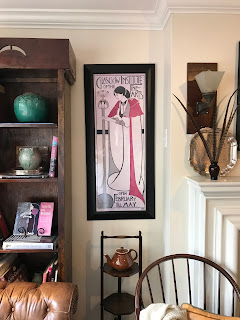 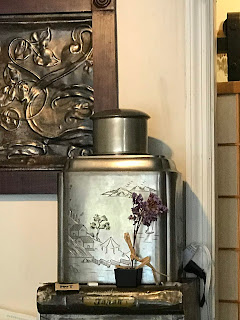 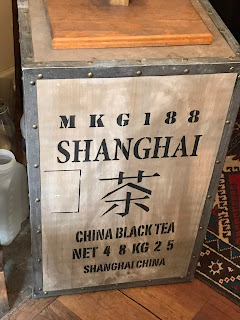 Several teas were available for sampling.  I purchased two teas and one book.  I've made the peach iced tea since I've been home, but the Emperor's Bride, recommended by my tea and blogging friend, Angela M., is still waiting to be opened. 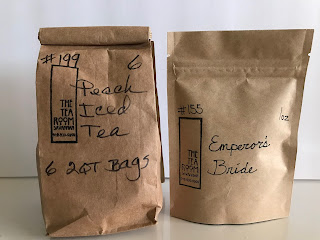 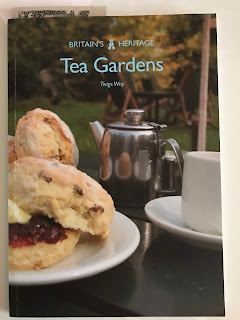 The Tea Room used to be a full-service tearoom at 7 E. Broughton St.  The décor, both inside and out, was inspired by Mrs. Cranston's tearooms in Glasgow, Scotland designed by architect/artist Charles Rennie MacIntosh.  His 'new art' style of geometric patterns and clean lines led to the Scottish Arts & Crafts movement.   Bruce Richardson featured The Tea Room in his Great Tearooms of America book [pictured below].  Unfortunately I never made it there before it closed sometime between 2012 and 2016. 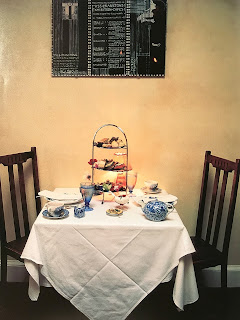 Elizabeth Ruby and her mother, Rebecca Wright, owned the tearoom with two other partners.  They had one unique tea offering that set them apart from all other tearooms - flaming oolong tea.  I first read about flaming oolong tea from 'tea lover Denise' on her now defunct blog, Uniquely Tea. She had visited the tearoom and ordered the specialty.

I was so intrigued that I called the tearoom and talked to Becky.  She said it had been on their menu since they opened in 1997.  It all began when she found "Broulee Spoons" in a catalog and ordered them. She explained that Broulee Spoons are used for flaming tea while Café Royale spoons are used for flaming coffee, but the spoons are interchangeable. Flaming Oolong tea was prepared tableside, and the presentation was so lovely that it became very popular and sold for $5.50 a cup.  Below is a photo from their old website.

A sugar cube is placed in the bowl of the spoon along with heated cognac, and then ignited. The melted sugar and brandy are then poured into the cup of oolong tea. 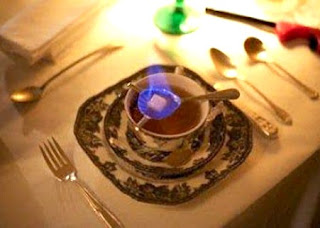 I have collected several of these spoons over the years, and decided this is the perfect time to offer one in a giveaway.

If you would like to win a never used Reed and Barton silverplate spoon [still in its original plastic bag and box], simply state that you would like to be entered in the drawing in the comment section of my blog.  I will announce the winner on Friday. 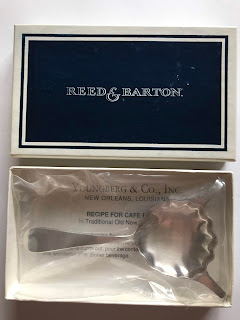