This post could really have two subtitles [1] "Don't Judge a Book by its Cover" and [2] "Good Things Come in Small Packages."

Since this was a 'tea trip' I included as many tea venues as possible.  Even though we had just enjoyed a magnificent High Tea at Laura's, we had 4:00 p.m. reservations at Twenty Six Divine tearoom.

I found Twenty Six Divine online when I was planning the itinerary, and it was dubbed "Charleston's Prominent Tearoom."  Their website and Facebook page looked great, so I called and made reservations for our group and put them on our itinerary.

While traveling on King Street [the street on which the tearoom is located], the neighborhood began to decline as we drove out of the historic district. Our driver [my hubby] cast a wary glance at me and asked, "How well did you research this tearoom?" "Well they had great reviews," I replied, as a panicky feeling gripped the pit of my stomach.  The last thing you want to do as a trip coordinator is take your group to a place that's not up to par.

We pulled into the driveway. The tearoom building was newer than surrounding buildings, and was actually rather quaint. 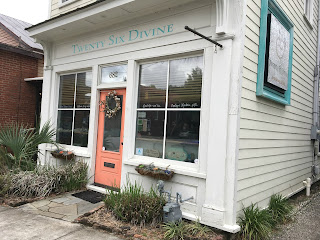 The parking spaces were filled [very limited parking], so I got out of the van [leaving my traveling friends still inside] while I proceeded to go in and check things out.  There was no entry from the front door [street side], so I walked around to the back. 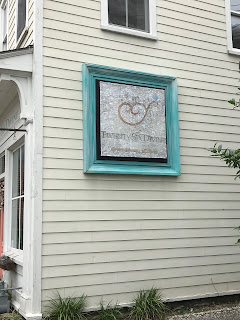 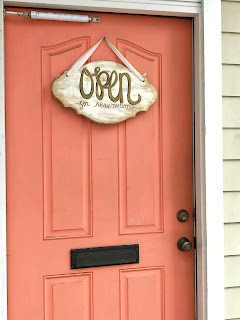 When I entered, there was only one small dining room with an approximate seating capacity of 18 or 20. We were a few minutes early, and another group of gals were still enjoying their Afternoon Tea, so we waited on their patio.  L-R:  Judy, Linda, and Ann 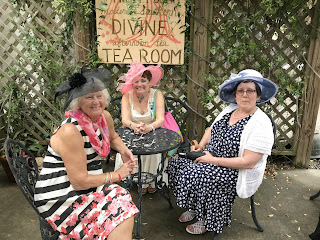 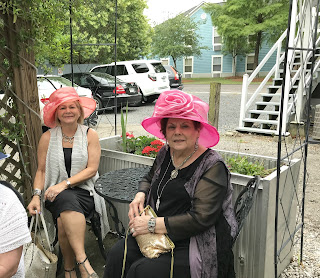 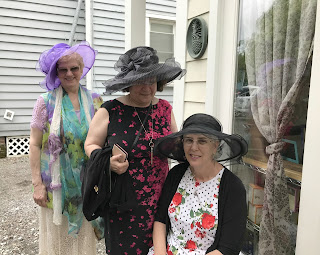 When the female patrons exited they gave the tearoom rave reviews, saying the food was excellent and the service great.  [My panic attack was starting to subside.]


When Jenn [the owner] cleared and reset the table, she invited us inside. 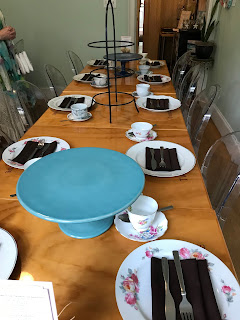 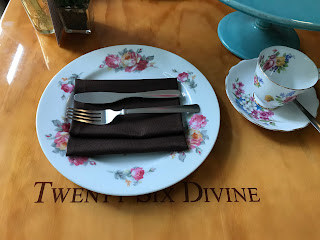 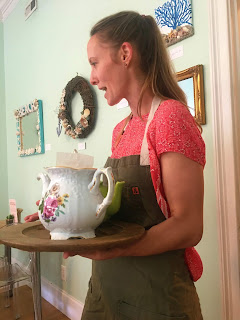 Teas from the nearby Charleston Tea Plantation are served.   I ordered Plantation Peach. 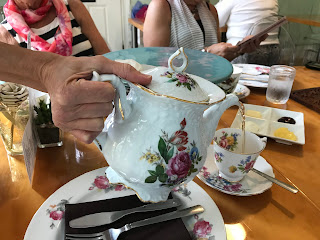 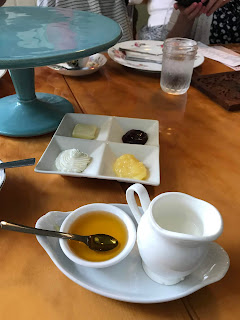 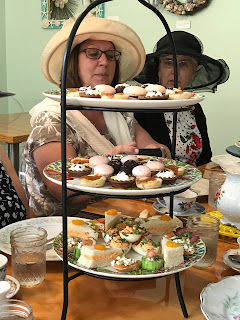 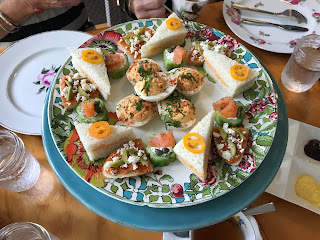 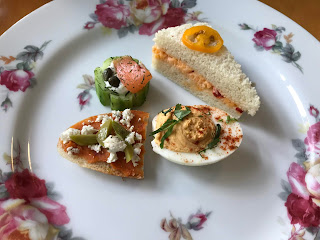 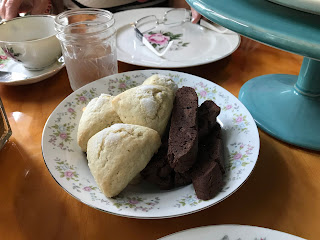 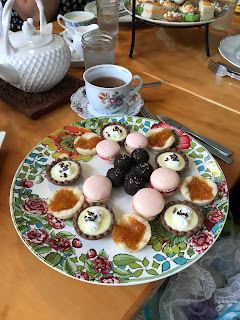 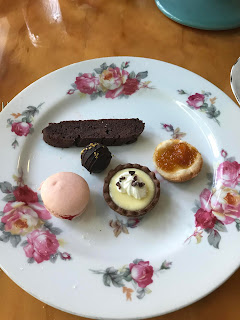 Each of us received our bills attached to a tea tin so we could place our remittance inside.  Cute idea! 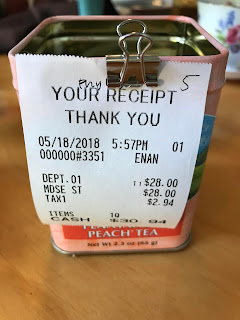 My happy co-travelers and me below.  There was absolutely nothing to fear.  It was a deliciously, delightful afternoon, and I'd return again.  If you're planning a trip to Charleston, I highly recommend them. 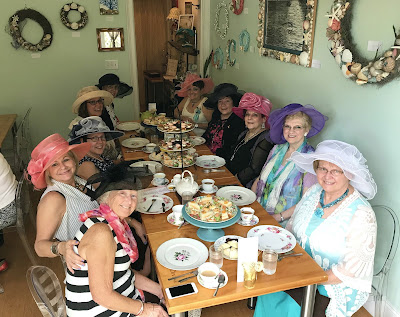 Here's the cute story about the 'hidden gem,' Twenty Six Divine.  It's owned and run by Enan and Jenn Parenzo [both chefs], and it opened in 2010.

Enan has impressive credentials - both educational and vocational.  He worked as a chef at the Charleston Place Hotel, and was a personal chef for local Charleston families before they launched their tearoom.

Jenn is a certified Pastry Chef with impressive credentials as well.  She too was formerly employed by Charleston Place Hotel.  [We went there for tea on Day 5.]

Twenty Six is the number that ties Enan and Jenn together.  Jenn was born on December 26th and Enan was born on May 26th.  They were married on March 26th.  Throughout their careers, customers have described their food as 'divine.'  So when they decided to start their own business the name had already been decided - Twenty Six Divine!

The evening was still young, and the Charleston Night Market was supposed to open at 6:30 p.m. so we went back to the historic district. 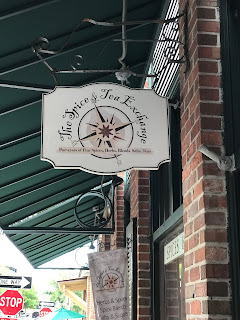 After perusing the shops on the perimeter of the market, we discovered when we went to the market that most of the vendors had packed up and gone home for the day. 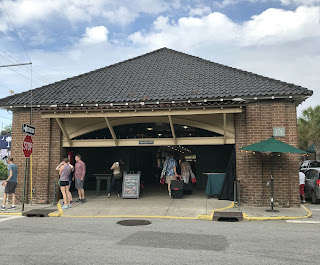 We should have walked back to our hotel to burn off some of the calories we consumed, but we opted to hire a pedicab to take us back instead.  Our bike driver was a young gal, but she was in great shape and pulled the cart plus Lori and me without any difficulty. 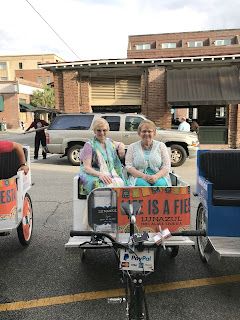 Linda and Barb were in the pedicab behind us and took our picture from behind. 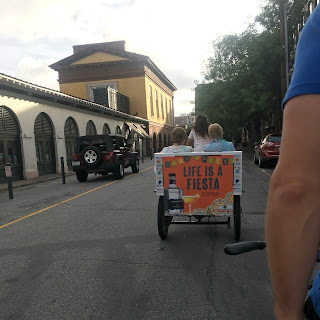 Teresa and Rebecca were out walking getting their exercise, and took a picture as we passed by. 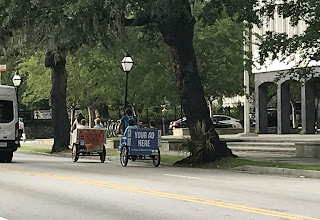 After a brief ride we arrived back at our hotel. 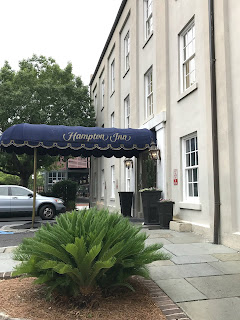 4:00 a.m. the next morning would come quickly, and we were planning on watching the Royal Wedding together.  Next post...