No tea trip to Charleston would be complete without visiting the Charleston Tea Plantation, so on Saturday, we were in the van at 9:00 a.m. for the 22 mile ride to Wadmalaw Island where the tea plantation is located.  My hubby and I were there in 2008, and it was hard to believe 10 years had lapsed so quickly, but nothing had changed. 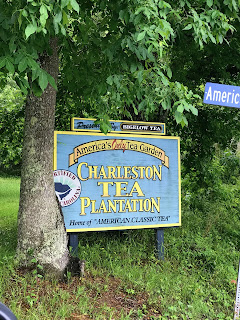 Tea first arrived in Charleston in 1799 when a botanist brought some tea plants from China to Middleton Place Plantation.  Charleston was a perfect climate for the tea plant, and there were numerous attempts to create tea plantations in the 1800's.  Pinehurst Tea Plantation, in Summerville, South Carolina [24 miles from Charleston], was the most successful, but it closed in 1915.  Years later many of its tea plants were transferred to Wadmalaw Island, and are the core of the tea bushes at the Charleston Tea Plantation today. 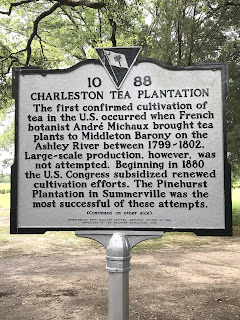 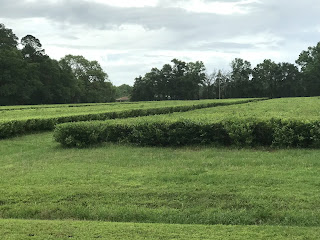 The Charleston Tea Plantation was founded in 1987 by tea expert, William Hall.  He created the American Classic Tea made with the tea grown on the plantation.  In 2003 he partnered with the Bigelow family who are the owners today.

My hubby dropped us off at the Welcome Center/Gift Shop/Processing Factory, where it was time for another group photo. 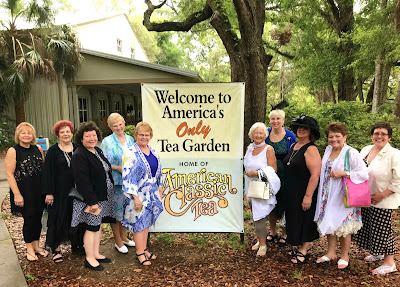 Lori took my picture with "Waddy," the plantation's mascot. 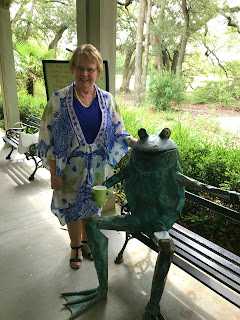 At the the gift shop we browsed, sipped tea from the tea bar, and purchased our tickets for the 35-40 minute trolley ride around the plantation. 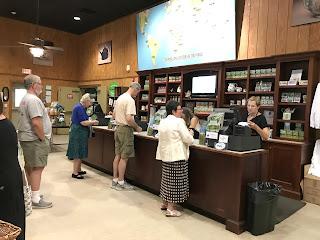 I saw some beautiful teacups and tea towels, but resisted temptation.  Instead I purchased three books and a tin of first flush tea [the first picking this year].  I'm always drawn to books, and they were my major purchases throughout the entire trip.  It earned me the distinction of having the heaviest suitcase!  ;-) 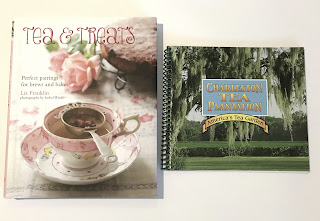 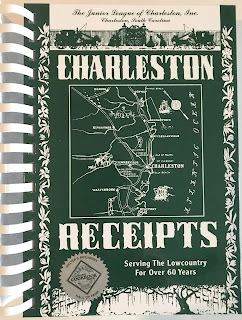 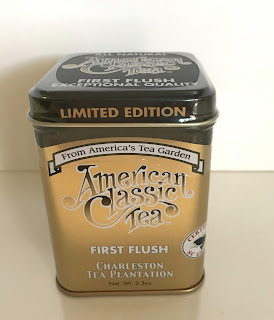 With trolley tickets in hand we went outside to wait for the trolley tour to begin. 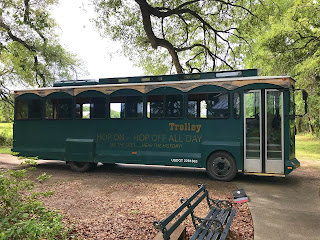 We learned that the tea plants [bushes] are planted 18 inches apart, and are maintained at a height of 38 inches.  It's the new growth of tea leaves ['flush'] that are harvested during a six month period from May thru October. It takes five pounds of raw tea leaves from the field to produce one pound of finished tea.   New tea plants are propagated with cuttings from existing plants, not seeds. 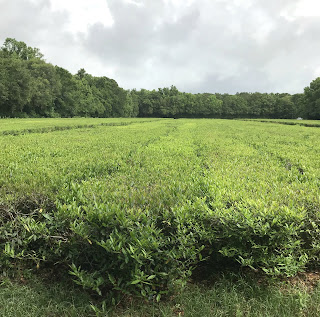 There was a stop at the greenhouse where we saw thousands of new tea bushes getting started. 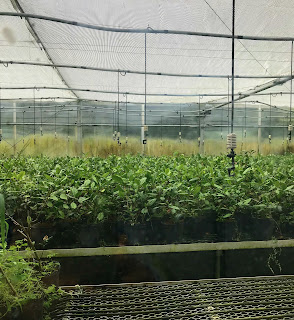 One bush had produced a white blossom with a yellow center. 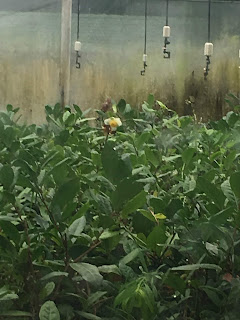 Judy, a former tearoom owner [below], found the tour very interesting, and said she wished she would have toured the plantation while she was still in business.  She not only would have benefited, but her customers as well. 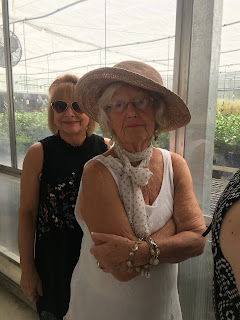 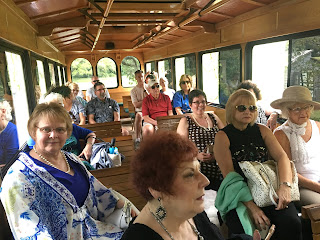 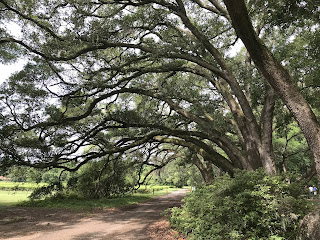 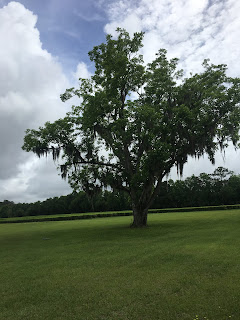 Unlike other areas of the world where tea is hand plucked by women, Charleston Tea Plantation harvests their tea mechanically by a one-of-a-kind machine dubbed the 'Green Giant.' 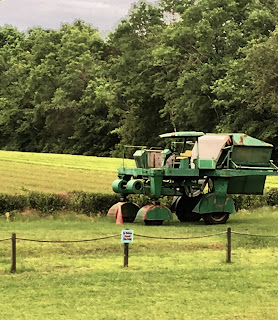 From the trolley tour we returned to the Welcome Center where we took the 15 minute factory tour.  Since it was a Saturday no one was working, but we were able to see the TV screens that explained in detail the steps it takes to make tea, and look through the large windows at the withering bed, the roto-vane machine and the oxidation bed.

I'm surprised Bigelow hasn't constructed a lovely tearoom somewhere on the property.  It seems like it would be a good money maker???

Then we returned to the van for our ride back to Charleston. 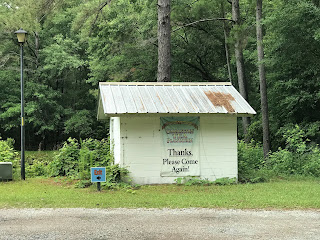 We had 1:00 p.m. reservations for Afternoon Tea at the Belmond Charleston Place Hotel, served in the Thoroughbred Club.   Next post...