Studying the Book of Ruth

Yesterday five ladies gathered at my home for our monthly Bible study.  The two women we studied were Naomi and her daughter-in-law, Ruth.  The Book of Ruth is only four chapters long, and one of only two books in the entire Bible named after a woman [the other being Esther].

It's a beautiful story of loyalty and love.  We discovered again that no one is unimportant in God's eyes.  On the surface, few saw Ruth as an important person.  She was a poor widow living in a foreign land away from her birth family.  Yet God had a great purpose for her.  Even though Gentile by birth, she became a part of the chosen line through which the Savior of the world would come to redeem both Jews and Gentiles alike. In God's perfect divine plan both Gentile and Jewish blood mingled in His Son's veins. [Jewish blood from Ruth's husband, Boaz]. One of the ladies sent me an e-mail afterwards saying she felt like she went home with wings on her heart, and if she were to have another daughter she'd name her Ruth.

Afterwards we had our soup luncheon, with a recipe I had never made before.  Normally it's a 'no-no' to experiment on guests, but since the Roasted Butternut Squash soup recipe came from a friend, I knew it would be good.   I served it with slices of French bread, and Pumpkin Spice black tea from Culinary Gourmet Teas.  I swirled a drop of Maple Balsamic Vinegar in the center of the soup, and the ladies seemed to enjoy it.  It's a hearty soup perfect for the 40 degree weather we've been having lately. 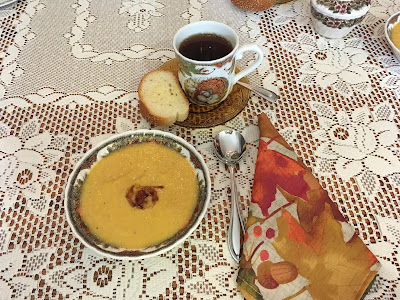 With Thanksgiving just around the corner I used my new 'Harvest Bounty' dishes made by Queens  in England.  Amazingly, I purchased them at the Christmas Tree Shop.  What a bargain!  As you can see, I don't do a fancy tablescape for our Bible study luncheons.  I keep it simple with the emphasis placed on our Bible study. 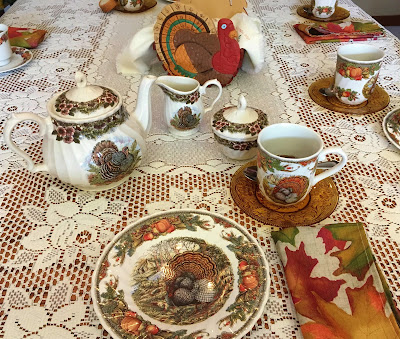 Originally I had planned to make a pumpkin roll for dessert, but since I had 3/4's of a bakery Cassata Cake left from Jerry's birthday dinner on Sunday, I decided to serve that instead.  It was delicious! 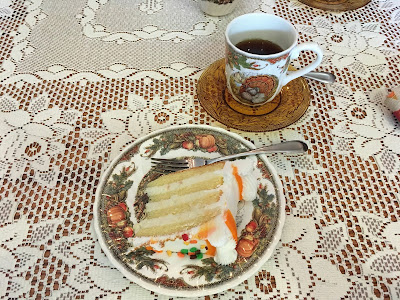 We're taking the busy month of December off, and will resume our study on January 9, 2018 [seems strange to be typing the new year already].  We'll be studying Hannah in I Samuel.

Today is opening day of deer hunting season in MI.  May God keep the hunter's safe, and give them a deer to bring home!