Two Birthdays, A Presentation and A Wedding!

Last weekend was another action packed one.  That seems to be the norm anymore.  It began with an ongoing birthday celebration for Jerry and grandson, Landon, who share the same birthday - #71 for Jerry, and #9 for Landon.  Landon requested a Michigan State birthday cake, but since all Michigan State logos/emblems are licensed, I couldn't find a bakery to make one, so I did.  Go Green!  But they failed to deliver a birthday win on Saturday with Ohio State beating them unmercifully 48-3! 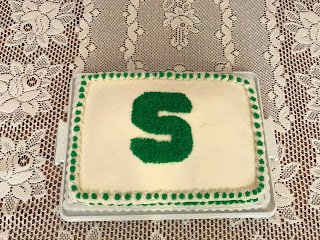 Last Friday we traveled to Chelsea, MI to be at our son's house when the three grands got off the school bus.  Landon's request for his birthday dinner was going to Subway!  So off we went.  We came back to the house for cake and gifts.  Their actual birthdays were yesterday, Nov. 12th, so we celebrated a bit early. 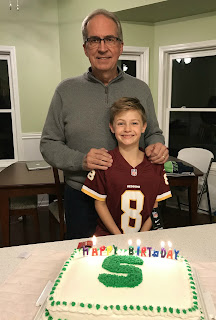 Landon wanted a Kirk Cousins football jersey.  Ask and ye shall receive!  ;-)  Kirk was Michigan State's star football quarterback before he graduated.  Now he's with the Washington Redskins - the jersey Landon received.  Below he's reading his cards first, then opening his presents. 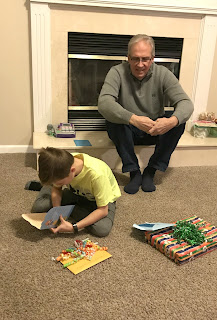 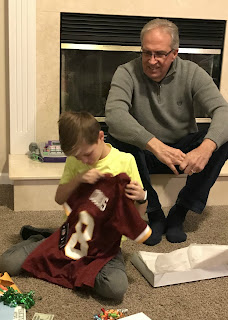 A happy nine-year-old boy with a hug of thanks for Papa! 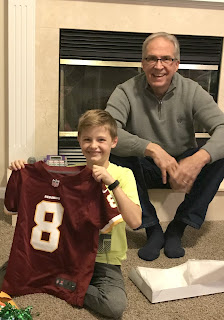 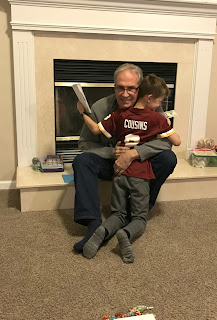 We celebrated Jerry's b-day on our side of town yesterday after church [Olive Garden], with our other two children and daughter-in-law. 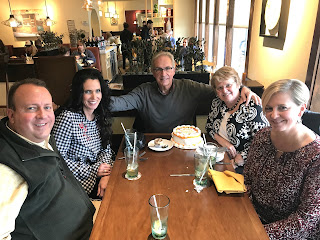 Saturday morning Jerry and I left home around 9:00 a.m. to head over to Cherry Hill Presbyterian Church in Dearborn, MI for a presentation on Dining at J.L. Hudson's Department Store.  They booked me almost a year in advance - long before I knew our grandson would be getting married that same day, but Jerry and I managed to squeeze in both - the presentation at 11:00 a.m. and the wedding at 3:00 p.m.  I wore my 'wedding attire' to the presentation because there wasn't time to go home to change in-between events. 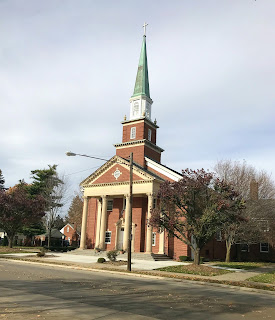 My Hudson display case and memorabilia. 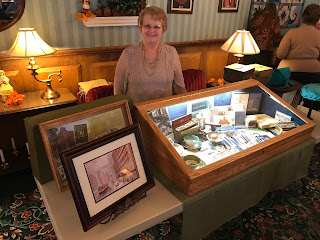 A mother and daughter who loved Hudson's.  The mother is holding her defunct Hudson's credit card, and wearing a gold commemorative charm of Hudson's building that her husband bought her on Hudson's 100th Anniversary [1881-1981].  Her daughter is wearing her Santa Bear sweater from Hudson's. 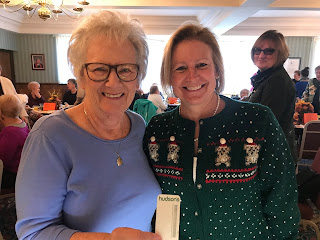 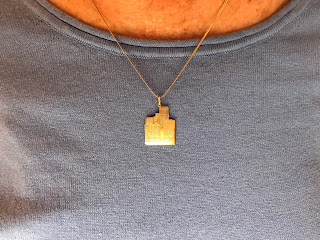 This was such a responsive group of ladies.  Four of them were former Hudson employees.  The church parlor was filled, with some of the ladies bringing credit fobs [credit coins that were the forerunner of credit cards] belonging to deceased relatives. It was truly an afternoon of nostalgic fun. 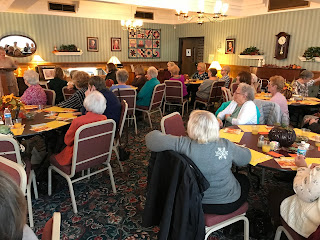 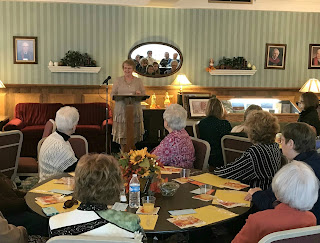 In the photo below I was holding up Angela McRae's book, Dainty Dining, explaining that her book was the impetus for my Hudson's research and memorabilia collection. I don't normally have a photographer with me [Jerry] to take so many pictures during a presentation.  He roamed around taking pictures when I was completely unaware. 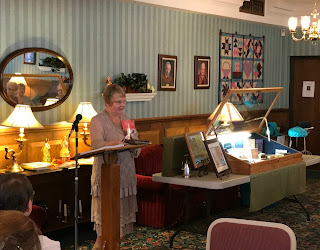 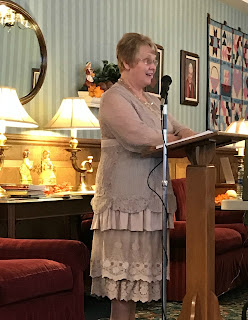 Following my presentation lunch was served - a Maurice Salad, of course!  Accompanied by tea and coffee, and a delicious Apple Crisp dessert. The price of a pot of tea in the Mezzanine tearoom [1935 menu] was .15 cents, and the price of a Maurice Salad with a roll on an undated menu was $1.45. Today it's $10.95 at Macy's Michigan Lakeshore Grill restaurants! 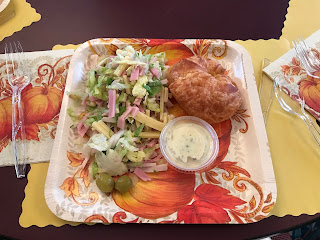 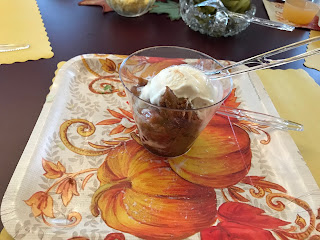 Sitting at our table was a lady [pictured below] who studied fashion design in college, and upon graduation became a women's clothing buyer at Hudson's.  She had lots of fascinating stories to share, and I will definitely be getting in touch with her privately. 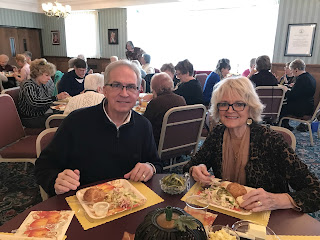 Another lady [below], was a Hudson's model.  She shared that every Wednesday Hudson's hosted a fashion show in their three 13th floor dining rooms.  At noontime they would walk amongst the diners modeling the latest fashions.  Then on Friday they'd model Hudson's fashions at the Statler Hotel.  I'll be talking to her privately too! 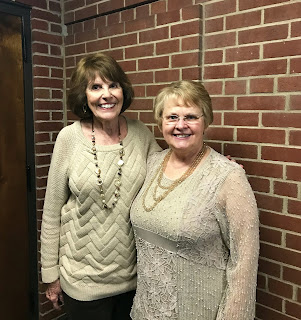 All too soon it was time to pack up my memorabilia and head across town to our grandson's wedding.  To be continued tomorrow...

Posted by relevanttealeaf at 11:16 AM