Yesterday eight ladies met at Secluded Celebrations Tearoom in Hartland, MI for a delicious 'high tea' meal and wonderful fellowship amongst friends.  The event was coordinated by my friend, Linda Pudlik.

This was my second visit to Secluded Celebrations. I blogged about my first visit on July 28, 2016.  You can read that post here.

When Grit [short for Margaret] named her tearoom, she got it right because it is definitely secluded.    As you begin approaching the tearoom, she has signs by the side of the road to let you know you're headed in the right direction. 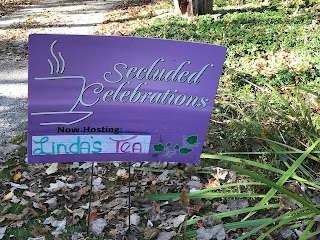 And one large sign before the house becomes visible. 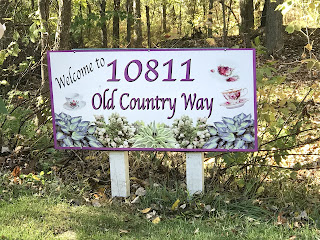 The tearoom is in a year-round sun porch that Grit and her husband added to their home.  Below is the entrance to the by-reservation-only tearoom. 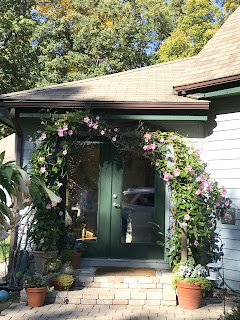 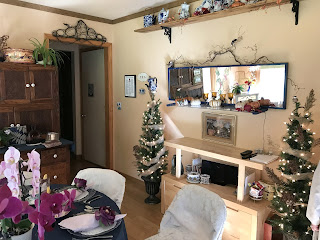 Grit doesn't like to have her picture taken, so there's no photos of her to share with you, but  she was ready and waiting for our arrival. 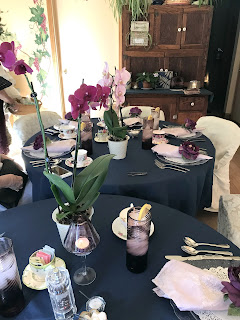 This was my place setting. 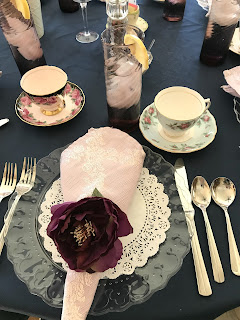 Three black teas [steeped from loose-leaf tea] were served throughout our meal.  We began with 'Peace' by Eastern Shore Tea Company.   It was followed by Black Raven [flavored with Black Currents] by Culinary Teas, and lastly a dessert tea, Chocolate Caramel Turtle.  They were all good, but my favorite one was the Black Raven. 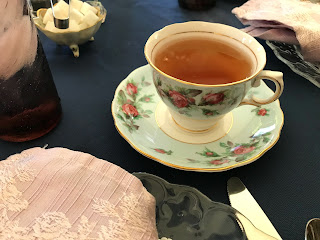 The meal began with a toast to friendship drinking Sparkling Cider with Pomegranates. It was accompanied by two baguettes spread with Grit's homemade Pesto and Sun Dried Tomatoes.  Grit said whenever she tries to change the spread to something different her guests always request the pesto.  By the way, the china underneath the baguettes was Grit's grandmother's wedding china. 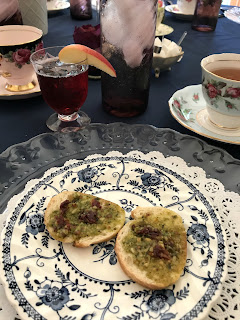 Next was Squash Soup [made from three different kinds of squash] garnished with Balsamic Vinaigrette. 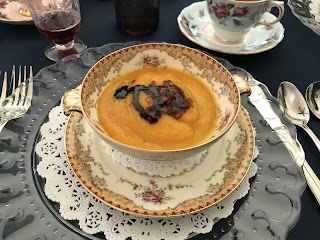 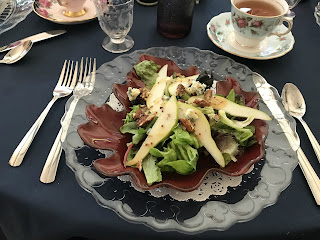 Our main course was Grit's signature Spinach Pie, a Pasta Salad, a slice of Artichoke, Chicken and Onion Quiche, and an assortment of fresh fruit garnished with slivered Mint from Grit's garden. 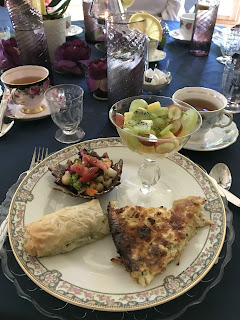 Dessert was a scoop of Vanilla Ice Cream topped with a Fruit Sauce and Fresh Fruit, and a piece of Chocolate Brownie Brittle.  Everything was delicious.  Grit charges $30 per person for a five-course meal which includes tax and gratuity. 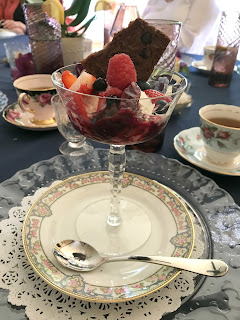 In between courses Linda asked each lady to stand and tell how they went about selecting outfits to wear to the tea, and what they felt their greatest accomplishment in life is.   It was an insightful time of sharing.

Every outfit of Linda's always has a fun story.  She could go to a tea party everyday for a year and not repeat outfits, jewelry, or hats.  She felt her greatest accomplishment was her success in the tea world, and sharing her passion for it with others. 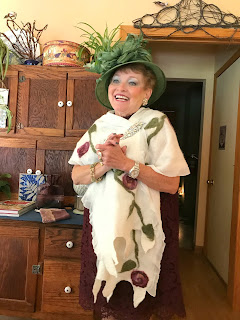 Teresa drove from Napoleon, Ohio to join us.  She's very modest and not one to draw attention to herself, but she's definitely a creative and talented lady.  She collects tea-themed purses, so I always look to see what purse she's carrying.  Yesterday she had one she got at the Empress Hotel in Victoria, British Columbia. 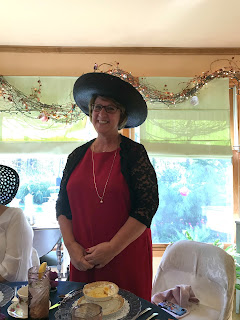 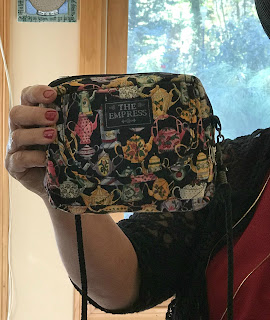 Judy said she always decides on an outfit the night before she attends an event and has it laid out, ready and waiting.  Yesterday, however, as she got ready, the outfit she selected didn't seem right, so she changed outfits a couple of times until the one she wore felt right.  She shared how she overcame deafness in one ear as a child, and went on to become the first women in Michigan to hold an executive city job in her career field. 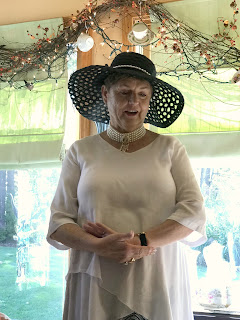 Barb always gets teased for wearing black because it's what she likes best.  She accessorized her black dress with beautiful autumn orange jewelry, jacket, and hat and looked lovely.  She felt her greatest accomplishment was choosing a good husband. 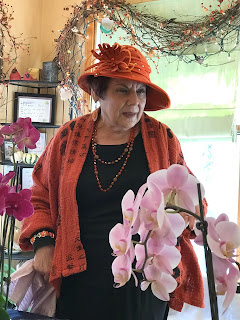 Louise oped for a whimsical outfit in keeping with Halloween which is right around the corner.  She felt her greatest accomplishment was not only selecting a good husband, but remaining happily married for over 50 years until he passed away.  She was also grateful for her five children. 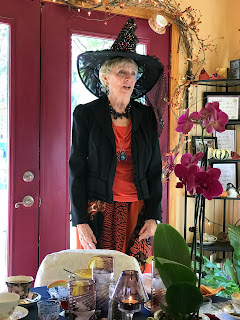 Suzanne selected an outfit in keeping with Halloween too - although she brought a non-Halloween hat in the car in case she changed her mind. She felt her greatest accomplishment was a successful career with the phone company, and raising her two daughters to have successful careers. 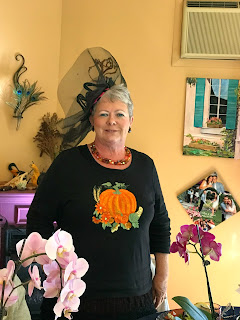 Sweet little Joanie is 86 years young and still leads a very active life.  She said her color choice for the outfits she wears is usually beige.  She felt her greatest accomplishment was getting her RN degree after her husband died in an automobile accident at a very young age, and left her with young children to raise. 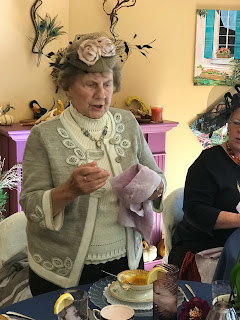 I didn't take a selfie when it was my turn. ;-)   The best thing I ever did in life was deciding to follow Christ and give Him first place my life. The accomplishment was God's when He sent His Son to redeem/save me from my sins.  I'm definitely not wearing a halo, because I've had my share of wrong choices and deeds, but God always forgives when I seek His forgiveness. Anything good that I have done is because of the abilities and blessing He's given me, and I'm sure the other ladies feel that way too.

Thank you Linda and Grit for a great afternoon!

Posted by relevanttealeaf at 12:53 PM