Halloween Candy of Years Past

I laid aside my presentation research today to go purchase Halloween candy for the residents that will be included in the program on Sunday.

I was hoping to find those cute little traditional pumpkin candy containers that have been around for years, but none were to be found.  It appears black cauldrons are the thing this year!  Okay, those'll work! 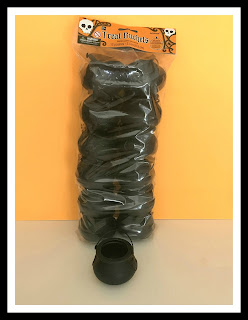 Today's kids have very discriminating and sophisticated palates, so many of the candies that were given on Halloween in years past would probably be thrown away by them.  But since my program is for elderly seniors I wanted to give them candy that would take them down memory lane.

The first on my list was peanut butter kisses wrapped in black and orange wrappers.  Any readers old enough to remember those?  They're a great combination of soft molasses taffy, with a pocket of crumbly peanut butter tucked in the center.  Necco [New England Confectionery Company] bought the rights to them in 1994 from the Glen Candy Company.  Call me old-fashioned, but I like them. 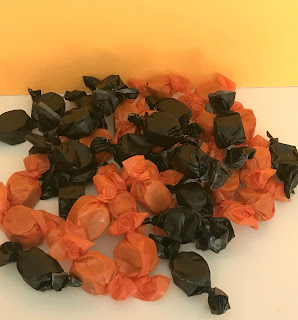 Now before we get too far into this post, go make yourself a cup of fall flavored tea to sip while you read. I found a box of Bigelow's Pumpkin Spice tea today. But there's also Harney & Son's Cranberry Autumn or Cinnamon Spice, and so many other great fall flavors available, without any of the calories found in candy! 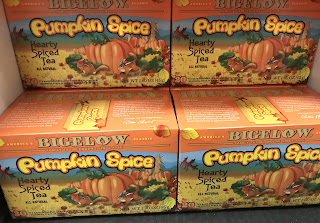 Next on my list was Candy Corn.  I already wrote a post about this candy in 2015, so to refresh your memory go here to read that post.  Another bit of trivia I discovered in my recent research is the three colors of the candy represent the 'trinity' of native American foods - squash, beans and white corn. 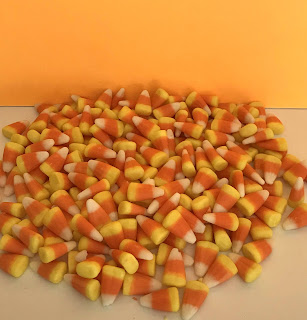 The third and last candy is Pumpkin Mellowcreams.  These are referred to as candy corn's first cousin.  They became popular around 1950 and were made by Brach's Candy Company, which is now Ferrara Candy Company. 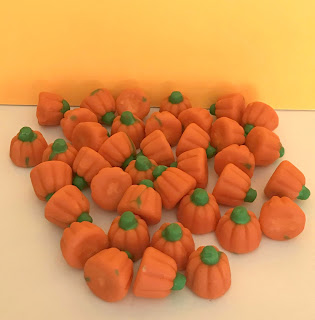 I think the residents will enjoy their little cauldrons of old-fashioned candy. 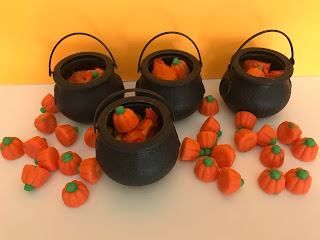 My research revealed that American's spent $8.4 billion on Halloween costumes and candy last year - the highest amount ever - and it's predicted the amount will be exceeded this year.  Costumes for pets have also become very popular, as well as home decorations.

I don't know if it's a bewitched statement, but I read that Halloween has increased in popularity so much that it's second only to Christmas in terms of total consumer retail spending, as well as a favorite holiday to celebrate with family and friends.

Posted by relevanttealeaf at 9:03 PM

Email ThisBlogThis!Share to TwitterShare to FacebookShare to Pinterest
Labels: Halloween 2017