This ending post for July is a bit hodge-podge since there are multiple things I wanted to share.

My hubby flew to Des Moines, Iowa with our son, Jeremy, Friday morning. Jeremy had business with one of his company's retirement communities, but yesterday [Sat.] morning they made the hour and a half drive to Omaha, Nebraska to see the Air Force base where Jerry was stationed in 1968 - Offutt Air Force Base [SAC Headquarters].  They were disappointed they couldn't tour the base because they hadn't made arrangements in advance, but they got a few pictures.  Jerry said it has changed significantly in 54 years. 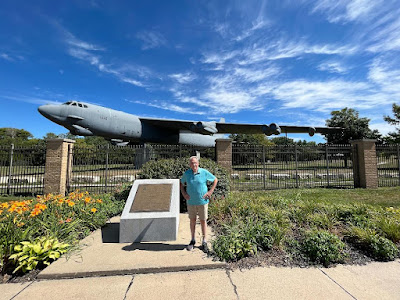 From there they drove the short distance to Bellevue, Nebraska [a small city in the Omaha metropolitan area] where many off-base military families lived - including Jerry & me and our young daughter.  Our address was 19 Martinview Rd.  Jerry made this trip down memory lane with our son, Steve, a few years back and Jeremy wanted to see our 'history' too.  I haven't been back since we lived there - I saw enough of it then to last the rest of my lifetime.
A few upgrades have been made to the small two bedroom house, but it was still very recognizable.  It definitely had new owners because the couple we rented it from were elderly in 1968 - probably our age now!  ;-)  The photo insert in the lower left corner is a photo of the house we took when we lived in it.
I wonder if the residents were puzzled by all the pictures being taken of their house.  The guys - and granddaughter, Ellie, who also went along - will return home later today.
Our daughter has been keeping her two granddaughters [our great-granddaughters] this week, and she took a cute picture of them while they were out and about and sent it to me.  Evie will start kindergarten in September.  Where does the time go??? 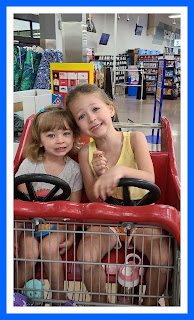 Today I drove down to the area where I grew up and had lunch with a dear friend.  We hadn't seen each other in five years, but we picked up right where we left off and spent a delightful 3 1/2 hours getting caught up on each other's news.  Shirley owned a lovely tearoom in my hometown of Wyandotte. 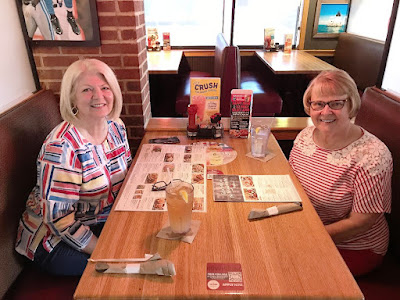 On my recent get-away with Linda she gifted some us with an adorable tea-themed fabric purse that she bought at a recent ethnic festival. 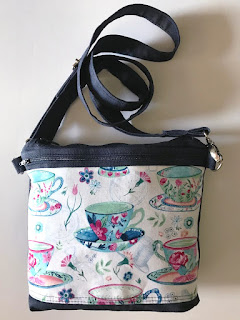 It was a bit of serendipity when we got to Ohio and Judy, the hostess of our gathering, had made all of us a jar of her homemade strawberry jam and placed a circle of the same fabric on the lid.  She said it came from JoAnn Fabrics.  I thought it would be fun to make a table topper and napkins with the the fabric and went to JoAnn's when I got home.  They told me the lady who made the purses bought all of their supply.  ;-)  If you like tea-themed fabric, you might want to visit your local JoAnn's.  I did some investigating and it's also available on Etsy. 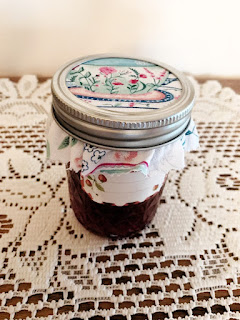 I follow Marsha Richards on Facebook.  She writes Tea for All Reasons; England for All Reasons [she lives in Virginia but makes frequent trips to England]; and Food for All Reasons.  She also has a shop on Etsy.  I've been eyeing her cookbook for awhile and when her website said she only had two left, I quickly ordered one.  [You know I really needed another cookbook to add to my collection! ;-)]  It arrived this week and I'm anxious to read it from cover to cover.  Marsha is very involved in Women's Christian Ministry and even though we've never met, I know I would like her. 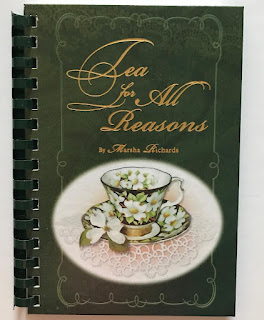 To end this post I'm attaching a photo to bring a smile to your face [or a tear to your eye]. Those of us who have collected beautiful teawares for years often lament what will happen to all our 'treasures' when we're gone since our children and/or grandchildren fall into the age categories of millennials and generation Z who are typically minimalists.  They don't like a lot of 'stuff' and this photo humorously depicts their idea of what a china cabinet's contents should be - simple, functional and disposable! 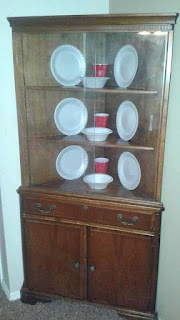 Wishing you a wonderful August with lots of fun in the sun!
Posted by relevanttealeaf at 8:01 PM