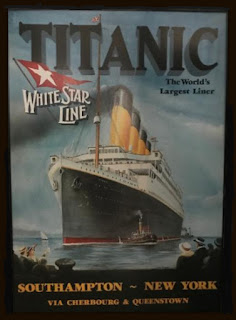 Around 11:40 p.m. on April 14, 1912, the Titanic struck an iceberg and sank in the waters of the Atlantic Ocean around 2:20 a.m., April 15th. 706 people survived and 1,534 perished.  It was a catastrophic event that is still remembered today, 109 years later.  All of the survivors have passed on, leaving only history to tell the story to future generations.

I have done significant research on the Titanic and have a few books in my collection as well as the lengthy [almost 3 1/2 hours] 1997 Titanic film.  I remember going to see it with Steve, Sharon and my hubby the first night it was released in the theaters.  As you may recall, the Downton Abbey series began with the Crawley family receiving news that the Titanic had sunk. 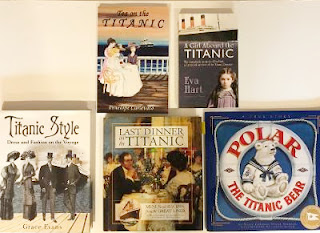 In 2005 my friend, Cheryl Nix, owner of the former Tea by Three tearoom, hosted a "Last Dinner on the Titanic.  Since my son, Steve, is a Titanic buff, she asked him to present a program.  He chose to portray himself as Second Officer Charles H. Lightoller and share Titanic facts through his eyes.
Below is a picture of Steve, Cheryl [right] and me taken the night of the dinner. 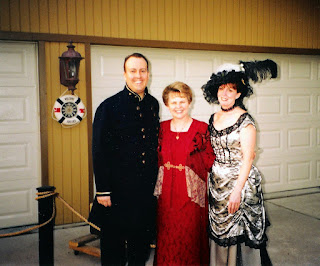 In 2012 the Titanic Exhibit came to the Henry Ford Museum in Dearborn, MI and I went to it. I had my picture taken on a replica of the iconic Grand Staircase. 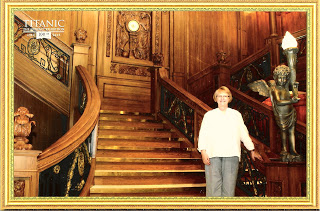 In 2014 I visited the Titanic Museum in Pigeon Forge, TN and acquired some replica teacups. If you are ever in the area, it is definitely worthy of a visit. 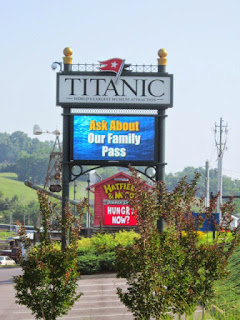 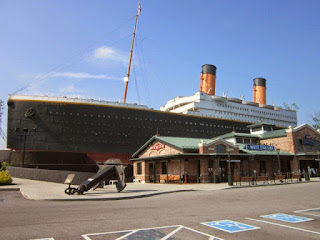 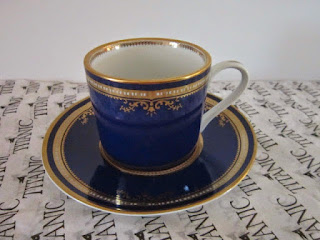 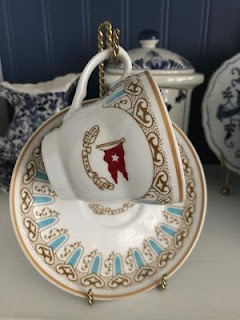 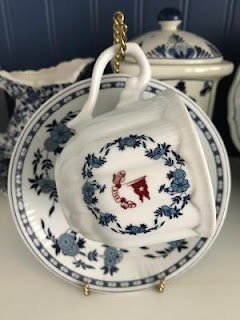 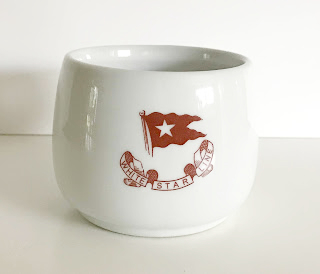 This is the perfect time to brew a cup of Harney & Sons Titanic tea [a blend of Keemun, Assam, Ceylon and Oolong] to honor the passengers who perished.

I remember Steve using the Titanic as an analogy in one of his sermons to illustrate how the world rejects Jesus Christ and His gift of life-giving salvation for temporal things that perish. Many Titanic passengers perished because they felt secure with the 'unsinkable' ship and rejected the lifeboats when they were initially offered.  They didn't feel the urgency or need to take the warnings seriously until it was too late.
Lastly, it's fitting to pay tribute to Prince Philip, the Duke of Edinburgh, who passed away last Friday morning, April 9th.  God gave him a long life, and our sympathies are with the Queen and her family as they mourn his passing.
I came across a plate and teacup of the couple in my collection that commemorating their 1959 visit to Canada. 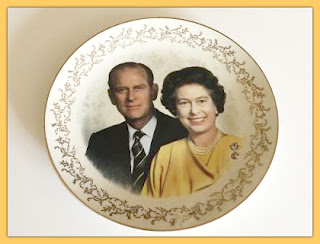 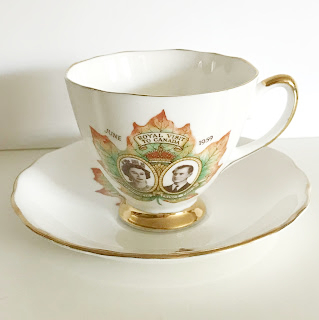 Posted by relevanttealeaf at 9:22 PM

Email ThisBlogThis!Share to TwitterShare to FacebookShare to Pinterest
Labels: 109th Anniversary of the sinking of the Titanic; Death of Prince Philip