While St. Patrick's Day is still nine days away, I hosted an early St. Patrick's tea/luncheon yesterday for my 92 year old aunt and her two daughters and daughter-in-law.

My aunt is my mom's youngest sister and the only sibling remaining out of seven.  The date, which had been on my calendar for awhile, finally arrived.  Since she is Irish [maiden name Sullivan], I knew she'd appreciate a St. Patrick's theme.  I hosted a St. Patrick's tea for her and my mom back in 2009.  11 years have swiftly lapsed, and during that time my mom and their youngest brother have passed.  Below is a picture of my mom and aunt in 2009. 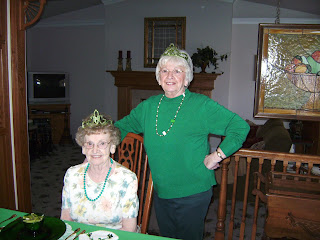 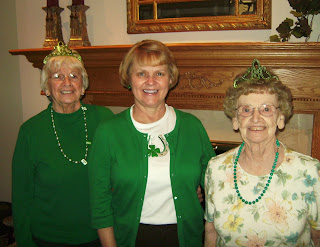 My tablescape for yesterday's tea/luncheon was different from 2009.  It's a good thing I already had a collection of Irish dishware, because I couldn't find anything in the stores this year.  The lady in Pier I told me they didn't get any shipments of Irish dishes this year and Kohl's only had a few linens.  Pottery Barn, Williams Sonoma, and Sur La Table had nothing on their website, and unless I missed it, I didn't see anything at HomeGoods or Marshall's either. Isn't St. Patrick's Day as popular as it used to be? 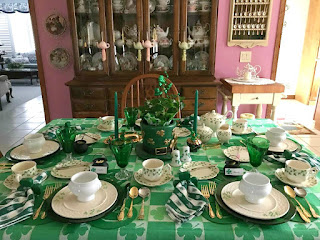 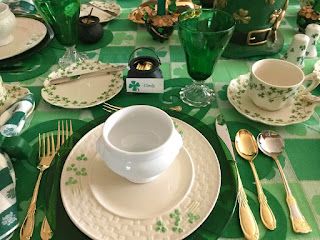 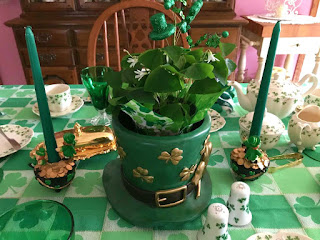 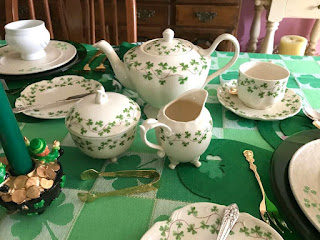 Little cauldrons filled with chocolate gold coins [symbolic of the pot of gold at the end of the rainbow in Irish folklore] was their small favor to take home and it also served as their place card holder. 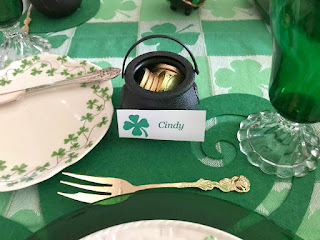 I began my baking on Thursday [I was off work], and started with Pistachio Bread that I used in parfaits.  I also made Irish Soda Bread in place of scones using a recipe from the Silver Palate Cookbook - a very good recipe. 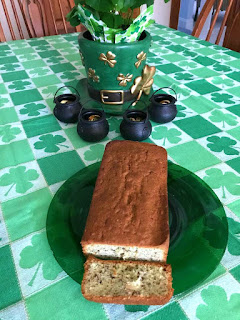 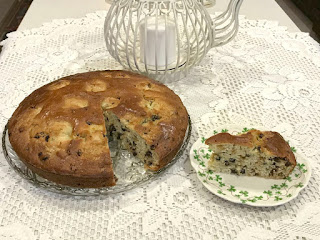 I made Reuben Soup with rye croutons, but forgot to take a picture of it.  It's a delicious soup that's always enjoyed.  The recipe was from a tearoom cookbook I purchased in 2008 - Civil-La-Tea in Gettysburg, Pa.   Sadly, the tearoom is closed now.

Next was a new recipe I tried - green macaroni and cheese using creamy avocados.  The taste was good, but I don't think I'll make it again because unless it's served immediately it starts turning brown [even using lime juice that was supposed to prevent that].  Once it turned brown it lost its appetizing appeal for me. 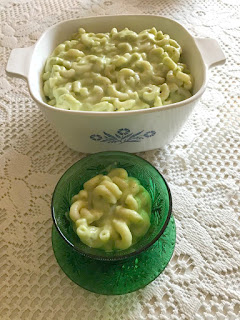 Individual Shepherd's Pie - another sure to please recipe. 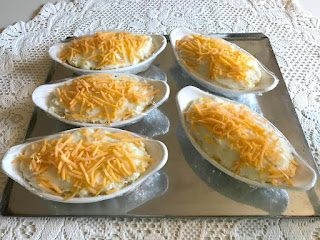 As mentioned, dessert was Pistachio Parfaits.  I probably should have purchased some Lyon's or Barry's authentic Irish tea, but I served Sweet Royal Delight - a flavored black tea blend that was created when Prince George was born so it still fit the Irish [British Isles] theme. 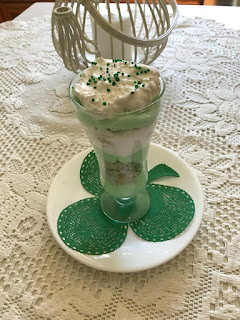 My cousin took a picture of me in my happy place - my kitchen dishing up the Reuben soup. 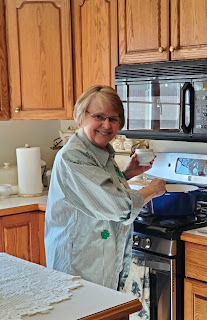 My Aunt with one of her daughters, Tammy. 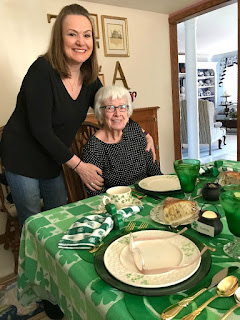 We ate shortly after 1:00 o'clock.  From left to right:  My aunt's daughter-in-law, Sherry,  daughters Tammy and Cindy on the right. 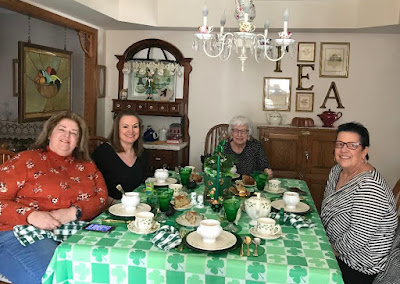 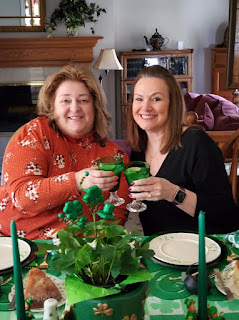 We sat around the table talking and eating, and when we were done went into the family room to look at pictures and reminisce about times gone by. 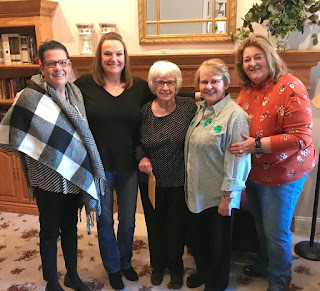 My aunt is amazing - at 92 she still bowls and doesn't need a cane or walker for assistance. She recently moved into an independent living apartment, and is trying to adjust to giving up her home of many years. 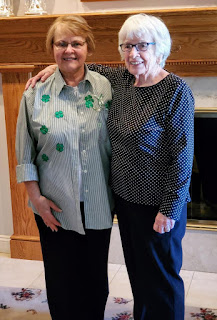 My cousin sent this picture of her taken two weeks ago where she's gleefully clapping when she got a strike.  It was at her youngest son's surprise 60th birthday party and she had the highest score of everyone in their group who bowled that night. 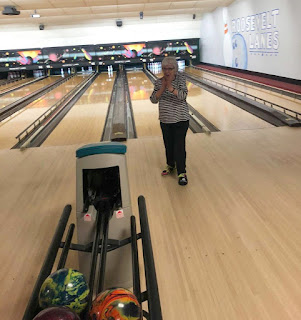 What a fun afternoon we had together, and we promised not to let so much time lapse again between visits.

Posted by relevanttealeaf at 8:52 PM