I love anything that's associated with tea, and there's always  fascinating things to discover, for example tea cozies - or is it cosies?  I guess it all depends on which side of the "pond"  you live.  In the United States we  spell these clever little teapot "jackets"  used for keeping  tea piping hot, a cozy, but I've read the British spell it cosy.

It was  fun reading the history of  tea cozies.  Apparently, the cozy  became popular in Britain after the price of tea became affordable.  Teapots became larger and larger pots meant finding a way to keep the tea hot.

The story goes, an early 1800's British farmer mistakenly placed his woolen hat on his teapot, and returned to find the tea still warm - making a hat the first predecessor of cozies!

Afternoon Tea became popular during the Victorian era [thanks to the Duchess of Bedford],  which influenced the invention of many new tea accoutrements.   The history of the tea cozy may have begun as early as 1660,  but it wasn't documented until 1867, and many surviving antique tea cozies today are from the Victorian Era.   It was inevitable that something would be created to keep the tea hot so  female gatherings in aristocratic closets or bedchambers wouldn't be cut short  before all their juicy gossip had tumbled out.   ;-)

Tea cozies were also a means for Victorian ladies to show off  their needlework skills.  Every style of needlework was used - needlepoint, crewel, embroidery, ribbon work, etc..

Tea cozies flourished, and the craze made it's way across the pond to this country.  They were made from wool, cloth, lace, and some were crocheted or knitted.

I don't have a lot of tea cozies because I  use  tea warmers, but  below are the  cozies  I own. 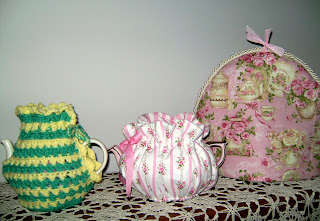 The first cozy was hand-made by a friend.  The second is a Thistledown "wrap around " tea cozy, and the third is a "dome" tea cozy .

In 2002  I  joined a  local tea society.  I met many wonderful ladies and learned a lot.  One of the ladies in the group made reproduction Victorian porcelain half-doll tea cozies and pin cushions.  Before she moved out-of-state,  the president of the tea society took me over to her house to view her beautiful handiwork.  I purchased a half-doll tea cozy and pin cushion.

She sits on top of one of my Sadler teapots.  Isn't she lovely?  I'm  afraid of getting tea stains on her beautiful dress if I actually use her, so she just sits  looking pretty!

Antique porcelain half-doll cozies, pin cushions, dresser dolls and boudoir lamps first appeared in Germany as early as 1840.  They were in such demand that they were produced by the thousands, not only in Germany, but in America, Japan, and France.  Some had carefully styled hair wigs. 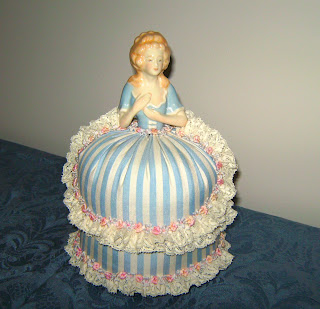 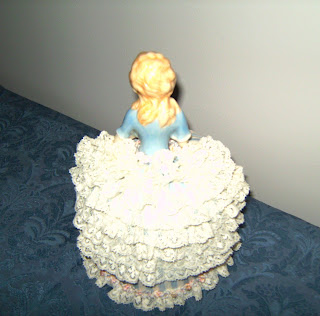 Everything is sewn by hand, and I'm happy to have them even if they aren't antiques.

I belong to a tea-themed E-group called Afternoon Tea Across America [ATAA].  Back in 2004 there was a discussion about vintage teapot carriers or "Carriage Cozies."  I was  fascinated by them.  Imagine my delight when I entered a tea room with my girlfriend in 2005 and spotted one!  Below is a photo of the tea room [Sheila's Tea], which is sadly no longer in business. 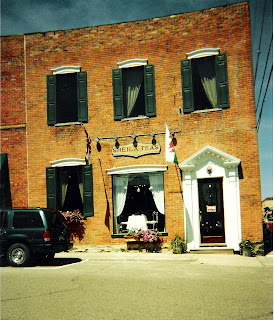 Below is the vintage teapot carrier.  I've read different accounts for its use.   The term "Carriage Cozy" came about because it carried the tea and  teapot by carriage - perhaps to a picnic.   It is said servants also used this cozy to carry the tea and teapot  from the downstairs kitchen to  their employers upstairs.   The cozy made transport easier, protected the porcelain teapot, and most importantly it kept the tea warm. 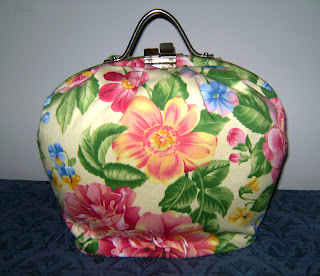 My cozy has been recovered inside and out, but the hardware is old.   Antique cozies would have been filled with lamb's wool for insulation, while the exterior would probably have been tapestry.

My girlfriend thought mine was a purse at first glance... and others think it resembles a bowling ball case!  The interior of the cozy is very soft and protects the teapot, but during Victorian times, I envision tea sloshing out of the spout during transport and making a  mess of the lining.  [If tea was, indeed, transported in the pot.] 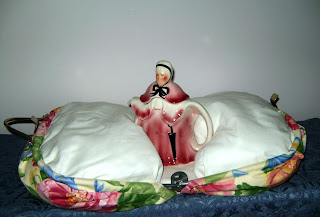 This type of cozy is still made in Holland today.  Their website, www.tanmar-teacosy.com  refers to them as "tea cosies with steel frames."  If you have any other information to share about the function of these cozies I would love to hear it.