After another delicious breakfast [served in the breakfast nook at Bissell House], we were ready to explore another area of Southern California. 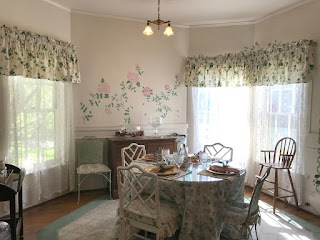 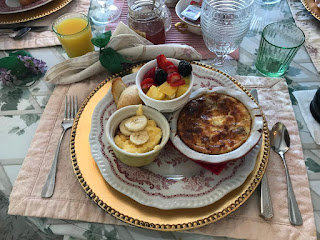 We traveled 33 miles from Pasadena to the beautiful City of Orange in Orange County. 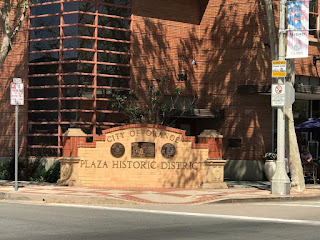 To put the size of the Palm Tree into perspective, that's my 6'3" hubby standing on the sidewalk looking very minuscule in comparison! It was another beautiful day as the clear, blue sky indicates. 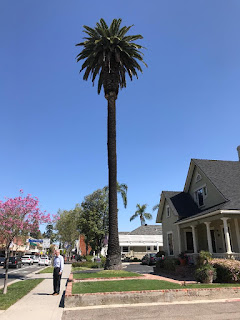 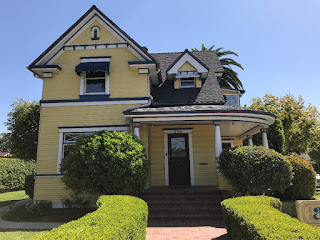 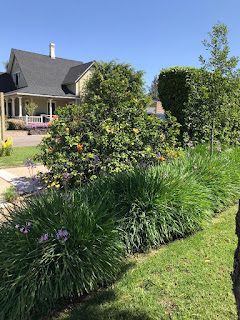 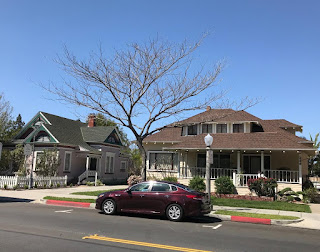 Orange is known as the antique capital of southern California.  I have never seen so many antique malls and vintage stores in one area.  We only went through one mall.  Since we were flying home we didn't have space for packages, so there was no point in teasing myself with things I couldn't have. ;-)  We walked around Old Town looking at the various shops until it was time for our Afternoon Tea reservation at Paris In A Cup Tea Salon - tearoom #2 of the trip.

Below is a trendy tea shop/café that was bustling with business. 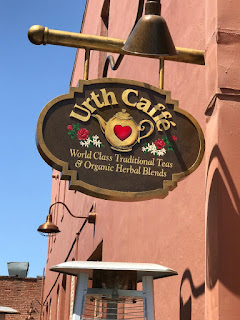 I had heard and read wonderful things about Paris In A Cup Tea Salon, so I was happy it could be included in this trip. 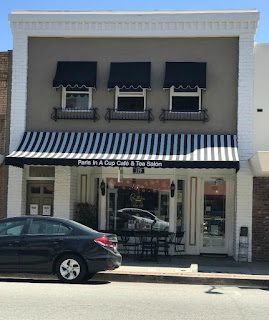 This is the second tearoom in Old Town Orange that Cheryl Turner has owned.  The first one was an English-style tearoom across the street from where Paris In A Cup is located. The first tearoom was sold when her business partner decided to retire.  When the new owner closed it less than a year later, people began urging Cheryl to open another tearoom. 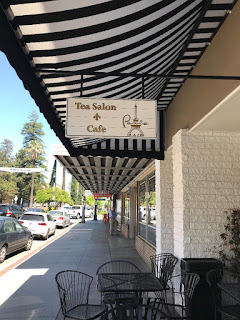 She decided on something entirely different this time - a Parisian tea salon, which has been open since 2007.   Julia Child surely would have loved this tearoom! 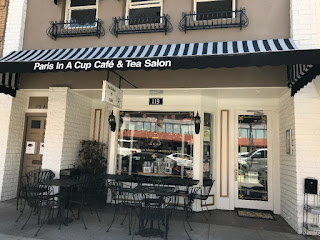 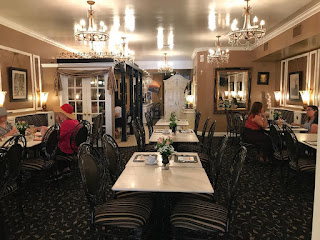 The area below has the feel of taking tea at a French sidewalk café. 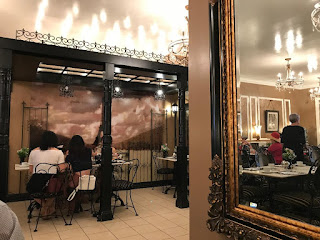 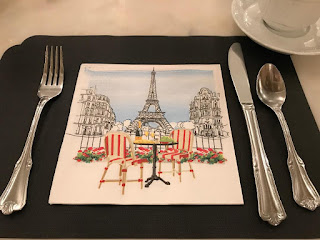 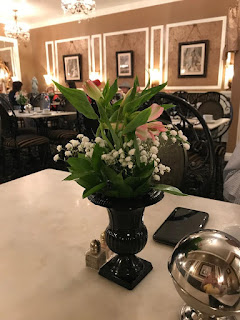 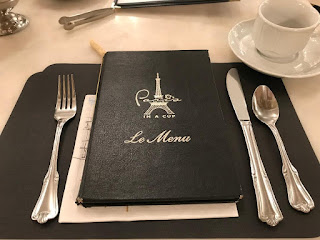 I couldn't help photographing one of the French options on the menu - The Juliette - because my second great-grandchild was born on April 3rd - five days before we left on our trip.  The baby's name is Juliette Grace.  I sent the menu photo to Tiffany [my granddaughter], and she replied: "I love my Juliette, and all things Paris!"  [She went to Paris on her honeymoon.] 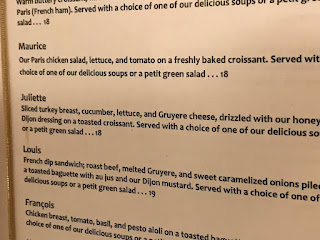 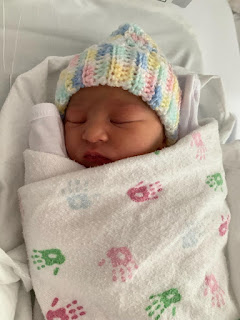 Back to Paris In A Cup ;-)  They have 125 teas to choose from.  Some are imported from four notable tea purveyors in France, 26 are their own blends, and some are from Harney & Sons in New York. 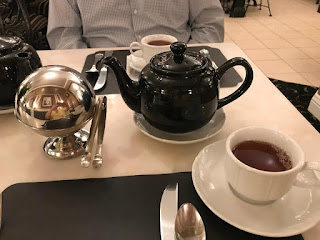 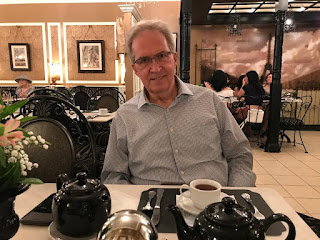 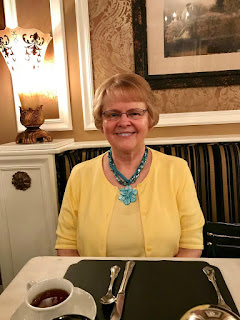 We ordered the Tea for Two, and I also got a cup of their French Onion soup. 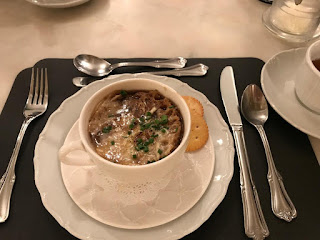 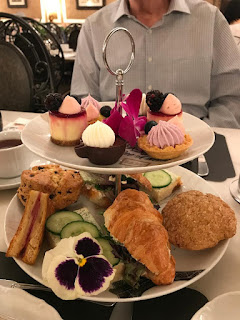 I had a French Vanilla scone sprinkled with raw sugar, and Jerry had a Currant and White Chocolate scone.  They were accompanied with jam and crème.

There were three delicious savories:  Smoked Almond Chicken Salad on a Croissant; Croque Madame [Ham and Cheese]; and Garden Cucumber.

Our desserts were: Fruit topped Cheesecake; a Lemon Tart garnished with Raspberry Cream and a Blueberry; and a mini Chocolate Cup filled with Chocolate Mousse, garnished with Whipped Cream.

They have a nice boutique at the front of the salon where some of their teas can be purchased.  I bought a 100g bag of Betjeman and Barton loose leaf lemon black tea. [There wasn't any of the peach tea for sale that I was served in the salon.] 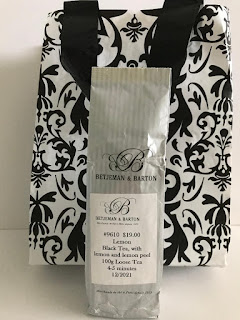 I thoughtlessly packed this in my carry-on bag along with the Elderflower beverage that I purchased at Rose Tree Cottage and already mentioned it was confiscated by TSA [transportation security] at L.A. airport.  When the security man pulled the tea out of my suitcase I said, "Oh no, you aren't going to keep my tea too, are you?"  He took it over to some kind of scanner and was satisfied that it was okay, then laid it back in my suitcase.  I think I would have had a meltdown right there in L.A. airport if he would have kept my $19 bag of Betjeman and Barton tea too!  ;-)

Then we were off to Laguna Hills where another exciting day was scheduled for Thursday, April 11th.  We stayed at the Hills Hotel in Laguna Hills two nights. 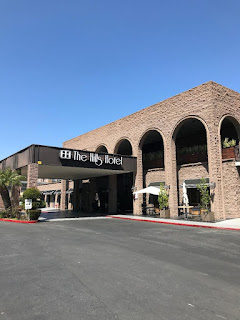