Day 2 began with a delicious gourmet breakfast [vegetable egg souffle, fresh fruit with maple cream, and baked pear half filled with raisins and nuts] at the B & B, served in the dining room. 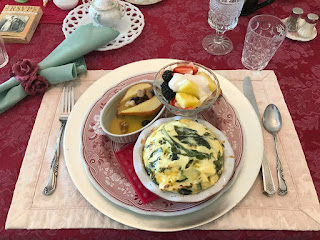 My maternal first cousin, Nancy, lives in nearby Upland, CA.  We're the same age [well actually I'm 10 months older ;-)].  She moved to California shortly after high school graduation, and I haven't seen her in over 50 years.  She came to our B & B and had breakfast with us so we could spend some time catching up.  It was great seeing her again! 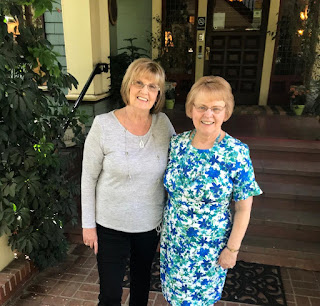 Then we were off to tearoom #1 of the trip - Rose Tree Cottage located at 801 S. Pasadena Avenue.

As I mentioned in a previous post, I'm doing a presentation about Julia Child next month. She grew up in Pasadena.  I made a note in our itinerary to try to find the house she lived in on Pasadena Avenue. [There were three different houses she lived in while growing up there.] Below is a picturesque photo of beautiful Pasadena Avenue taken from our car's front window. 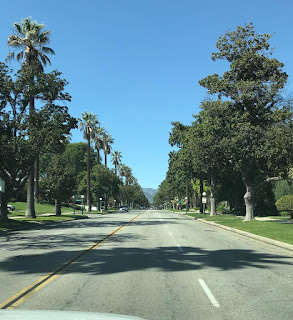 Unexpectedly I spotted Julia's house that I had seen in pictures.  Jerry turned the car around so I could get out and take pictures. 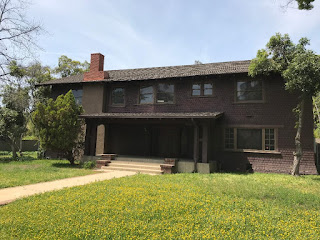 The craftsman house was built in 1911.  It's been boarded up for 35 years and left to deteriorate. Caltrans [California Dept. of Transportation] bought up hundreds of homes to demolish for the 710 freeway extension [a tunnel], but the plan never materialized. 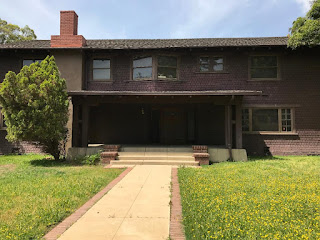 Caltrans began selling some of the homes in late 2016, but as yet none of the historic homes on Pasadena Avenue have gone on the market.  The Pasadena Heritage is working to get the McWilliams house [Julia's childhood home] added to the National Register of Historic Places.

Another photo of Pasadena Avenue right near Rose Tree Cottage. 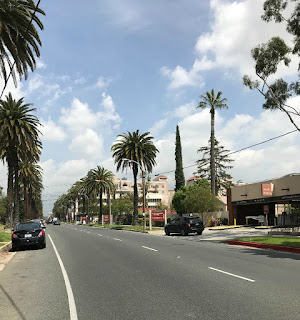 No photographs are allowed inside the tearoom, so I took several outside.  Our reservations [which must be made one week in advance of the day you wish to come] were for the 1:00 p.m. seating [there are two other seatings at 2:30 and 4:00]. 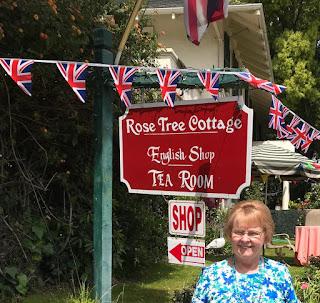 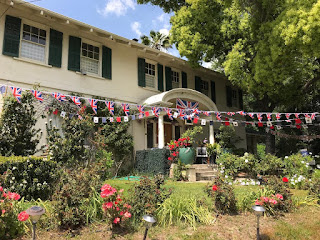 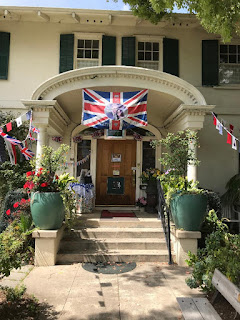 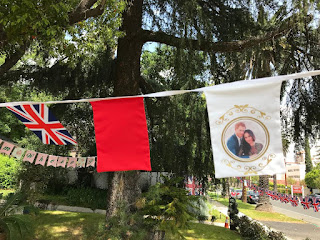 Back parking lot and garage. 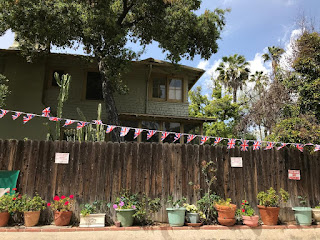 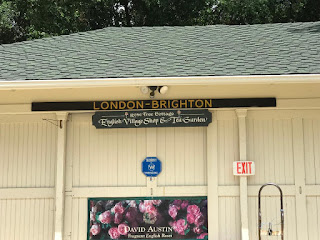 They have a recommended dress code - sport coat and tie for men.  This is my handsome hubby. 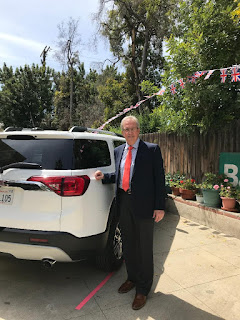 We arrived a bit early so we browsed their large retail area while waiting to be seated.  They sell Barbour jackets and clothing, hats and fascinators, books, new and vintage dishware, and they have a large grocery section of imported foods from Britain and Ireland plus foods made on site such as their own Rose Tree Cottage Shortbread and Scones.

I hope you'll be able to visualize the tea from my descriptions since I couldn't take any photos of the beautiful tea. They graciously explained everything while I feverishly took notes. Mary Fry [owner] seated us, and server, Jeralyn, placed a linen napkin in our lap. Fresh flowers were on each table along with a fresh strawberry arrangement in a stemmed sherbet goblet.  Our table was covered with a pink linen tablecloth, and we were served on British Pimpernel placemats [hard cork backed placemats].

Our table was in front of the parlor window, and fortunately I was able to find a photo of our table courtesy of their website [red arrow]. 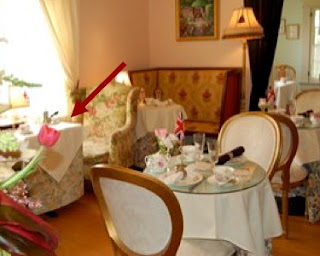 Our tea began with an imported Elderflower cordial - a non-alcoholic infusion of Elderflowers, fresh lemon juice and sparkling mineral water.  It was garnished with a strawberry piece.  I was so impressed my hubby bought two bottles - one to give away while we were in CA and the other to bring home.  Unfortunately, I didn't pack mine in my checked bag for the flight home, and they confiscated it from my carry-on bag at the airport!  ;-( 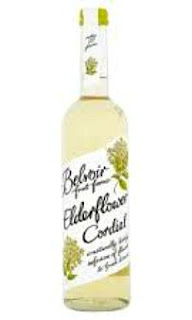 Jeralyn poured the 'English Village' black tea [a blend of Ceylon, Indian, and Kenyan teas] from a silver teapot.  'English Village' is the house blend created by Edmund when the tearoom opened.  Jeralyn asked if we wanted milk in our tea [which we didn't]. If we did, she would have poured the milk in our teacup first.  She made sure our teacups were kept full throughout the entire tea.

A two-tiered server was brought out with our savories:  Coronation Chicken sandwiches, Cucumber on White Bread [the cucumbers were soaked in vinegar which added wonderful flavor], Three Cheeses on Walnut Bread, and a delicious warm Yorkshire Roast Beef Pudding.  The plates were garnished with clusters of Green and Purple Grapes, Cherry Tomatoes and Parsley.

Our china luncheon plates [which matched our teacups] were changed to prepare us for the freshly baked warm currant scones [which they ship all over the country].  They were served with a jam variation of British 'Summer Pudding' made on site - strawberries, raspberries, blackberries, and currants, along with real Devon cream garnished with a pansy.  They were served in a two-bowl caddy that matched the two-tiered server used for our savories.

Dessert was warm Sticky Toffee Pudding, Shortbread garnished with a Strawberry slice, and a Petit-Four.

When we finished our tea, we went outside for photos.  Below, Mary Fry and Jeralyn. 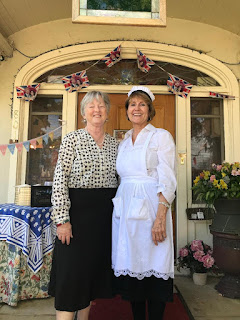 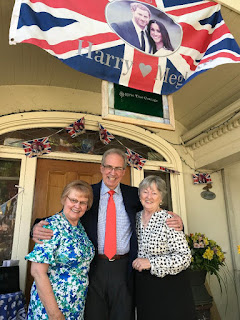 Edmund had recently broken his ankle, so he wasn't in the tearoom in tuxedo and white gloves like he normally is.  Mary said he had overdone it during the earlier fundraiser garden tea.  To our surprise and delight, Mary invited us on the patio where he was relaxing after we finished out tea so we could meet him [along with their cat, Bob]. Edmund asked what made us want to visit their tearoom. I replied, "Because I've read about you in all the tea books and magazines, and you were high on my bucket list." I was almost paranoid I wouldn't be able to get a reservation.  You have to call promptly at 10:00 a.m. [one week prior to your visit] which was 1:00 p.m. Michigan time, while I was at work.  I told my boss I had an important phone call to make, and set the alarm on my cell phone so I wouldn't get distracted and forget to call.  They have been in business over 40 years which is absolutely incredible for a tearoom. 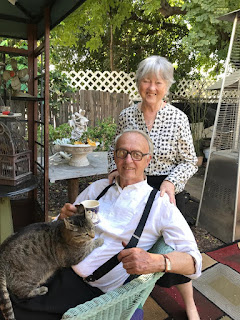 Another delightful surprise came the next day when we were in Orange, CA.  While walking through one of the many antique malls in the city, my cell phone rang.  When I answered, it was Edmund thanking us for coming to their tearoom.  In all the tearooms I've visited [and there have been many], I've never received a phone call from an owner thanking me for coming.  If you're ever in Pasadena, I highly recommend this tearoom!

To raise additional money for the African Children's Foundation [to ship items to the Kenyan children] they have a raffle titled 'Baby Sussex Guessing Game.'  Whoever guesses the date of birth, sex, and weight of Prince Harry and Meagan's baby will get a free tea for two - or if we're the lucky winners Mary said she'd mail us some of their scones.  We bought five raffle tickets, and have our fingers crossed.  ;-)  It's for a wonderful cause, regardless.

After we left Rose Tree Cottage we changed our clothes then went to see a couple other Pasadena sites, such as the Rose Bowl Stadium. 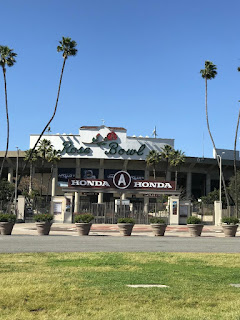 Jerry by the statue of Jackie Robinson. 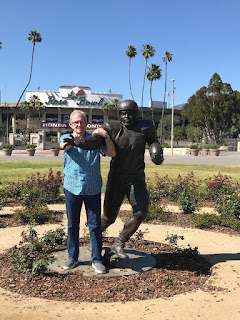 Pasadena is surrounded by the San Rafael Hills and San Gabriel Mountains. 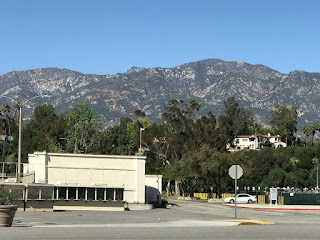 I was intrigued by houses built on mountainsides. 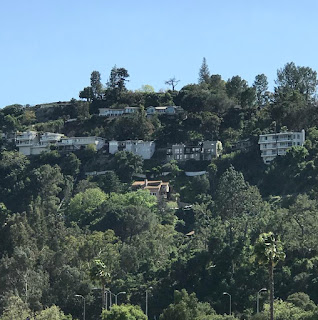 Mary recommended we visit the craftsman Gamble House.  It was closed by the time we got there, but we took outside pictures. 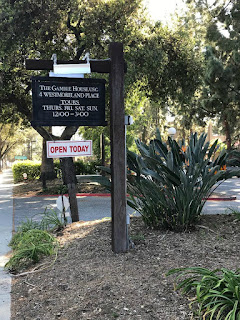 It is one of the finest examples of architecture from the Arts & Crafts Movement built in 1908 for David & Mary Gamble [of Procter & Gamble]. 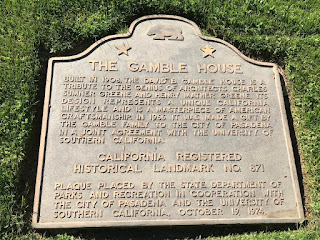 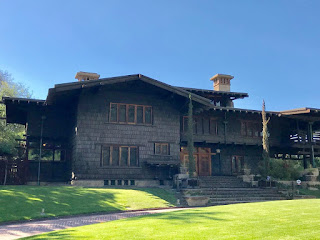 Side and back view. 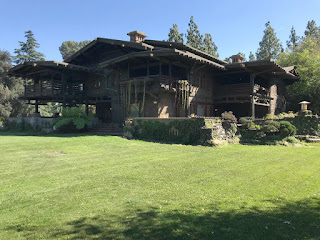 I texted our kids that Pasadena has lots of Craftsman bungalows, Victorian homes, Spanish/Mediterranean stucco style homes with tile roofs, and even some very modern homes, but I didn't see any brick ranches like ours back in Michigan.

This concludes day 2 in Pasadena.  Day 3 we traveled to Orange, California for tearoom #2.  Next post.