A New Chapter In My Tea Journey

As you know, I only posted twice last week, and you may have wondered what was going on in my little corner of the world. For those who aren't friends with me on Facebook, here's the explanation: I have a new job!

In February 2007, The Whitney restaurant in Detroit was purchased by Arthur [Bud] Liebler, and reopened under his ownership four months later.

In September 2007, I went with a friend for lunch and was seated at the table pictured below in the beautiful music room. 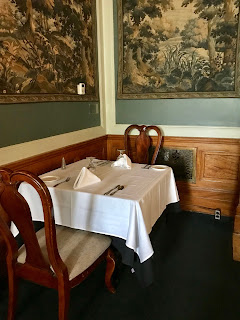 The 52-room mansion, built in 1894 for lumber baron David Whitney, Jr., is awesome.  The tapestries in the music room are not original but are similar to the originals. 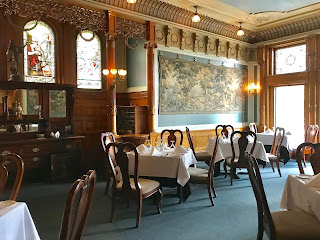 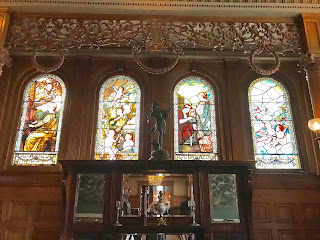 Aspiring to put my tea knowledge to use in the hospitality industry, I commented to my friend, "Wouldn't it be wonderful to work here as their Tea Director?"  They needed one - their tea was served in a small stainless steel teapot placed on a doily-lined plate accompanied with a lemon wedge.  So far so good, but it went downhill from there because inside the teapot was a generic tea bag [made from fannings] from King Coffee, priced at $1.50 on the menu.

That's when my communications with The Whitney first began.  I wrote to Mr. Liebler and all three General Managers who held that position from 2007 thru 2012, but the Tea Director position was filled internally with servers and banquet managers.  A great tea program just didn't seem to be high on their priority list, so I ceased my pursuit to work there.

This past June I learned their Tea Director was no longer with them, so I decided to make one last attempt.  I sent my letter and waited.  As time passed I began to think it was another futile attempt, until I received an e-mail from the Director of Operations on August 20th.  An appointment was scheduled to meet with him on August 27th, I attended an orientation on August 28th, and began work as their Tea Director on September 5th.  My dream finally came true!

The teacups used for Afternoon Tea are stored on the shelves where the music used to be kept [pictured below]. 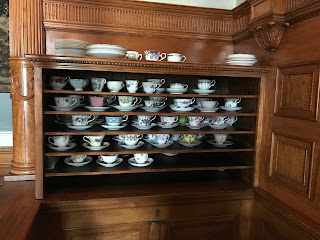 The Whitney Mansion [below] viewed from across Woodward Avenue.  It is such a privilege to be a part of this historic restaurant that is one of Detroit's 'crown jewels'. 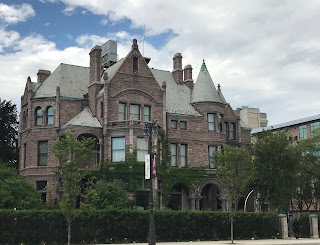 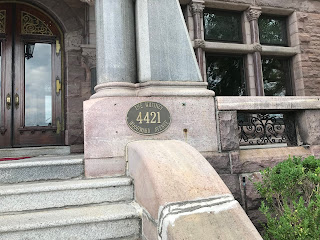 If you've followed my blog for any length of time you know I've done many presentations about J.L. Hudson, and his magnificent department store. I found the historic connection between David Whitney, Jr. and J.L. Hudson very interesting.  I'll share with you what I posted on Facebook:

"In 2015 I was privileged to coordinate a fundraiser tea in J.L. Hudson's former home on East Boston Blvd. 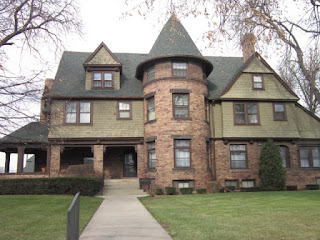 In 1889 J.L. Hudson borrowed $242,000 from his friend, David Whitney, Jr., to purchase the property at Gratiot and Farmer for his new 8-story department store [which expanded greatly over the years].

Now I'm privileged to serve tea in Mr. Whitney's former home.  My designated tea storage area is a large closet in Mr. Whitney's bedroom.  How cool is that!  If tea is the only thing in his closet after he expired, he lived an upright life!"  ;-)

I'll continue to keep in touch on my blog, but my posts won't be as frequent as they used to be.  Thank you for understanding.

Email ThisBlogThis!Share to TwitterShare to FacebookShare to Pinterest
Labels: The Whitney; Tea Director