Elizabeth Alexandra Mary Windsor took the throne February 6, 1952, upon the death of her father, King George VI.  To allow for a period of national mourning, she was crowned 16 months later in London's Westminster Abbey.  She celebrated her Diamond Jubilee in 2012, but June 2, 2013 marked the 60th Anniversary of her Coronation.  She was 26 years old when she took the throne. 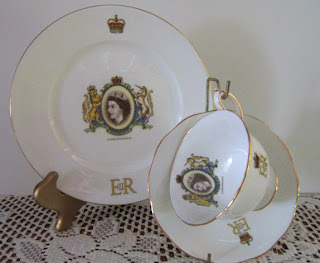 The 87-year-old Queen spent her anniversary day at her favorite residence - Windsor Castle - where she attended a private church service to celebrate the anniversary.  More than 8,200 guests attended her coronation, and as many as 27 million people watched it on TV - Britain's first major TV event.

The official commemoration will take place today, when the Queen will return to Westminster Abbey with the Royal Family for a service with 2,000 guests.  The Archbishop of Canterbury will deliver the sermon, and Prime Minister David Cameron will do a reading. The Queen and her great-great-grandmother, Queen Victoria, are the only U.K. monarchs to celebrate a Diamond Jubilee. 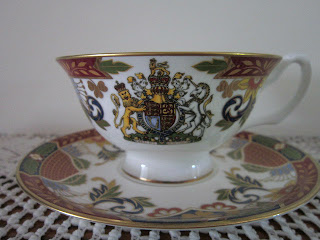 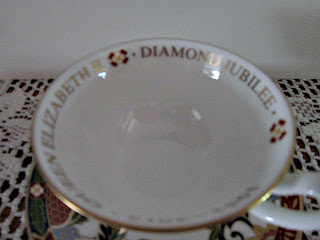 It is said the Queen's day begins when she is woken at 7:30 a.m. by a chambermaid who brings in her tea tray.  Since tea has always been a big part of her life, I searched the Internet for tea photos to share in today's post.

The Duke and Duchess of York with Princess Elizabeth having a tea party on July 30, 1929. 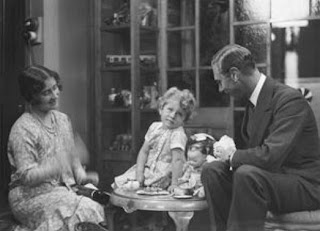 I purchased this print of King George VI, Queen Elizabeth [Queen Mum], and Princesses Elizabeth [seated] and Margaret [standing] having tea, when I was at the National Portrait Gallery in 2007. It's called "Conversation piece at the Royal Lodge, Windsor" by Sir James Gunn, 1950.

The Queen relaxes with a cuppa during a picnic on grouse moors. 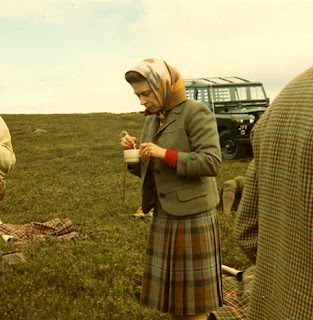 The Queen drinking tea in Kyoto, on a State Visit to Japan in 1975. 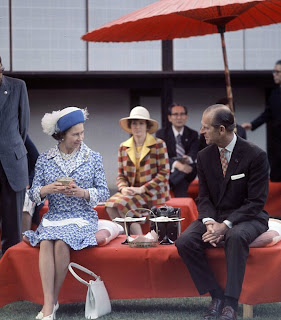 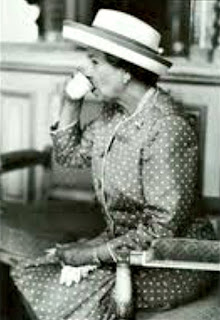 The Queen having tea in a private home in the Castlemilk area of Glasgow, Scotland  July 7, 1999. 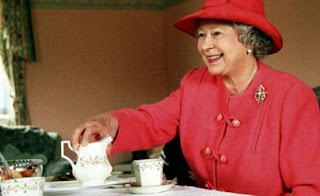 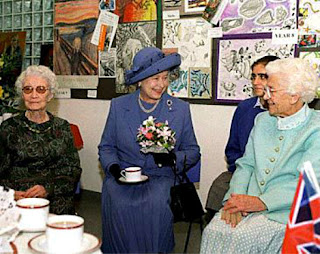 The Queen takes a break with hospital staff during a visit to Manchester Royal Infirmary. 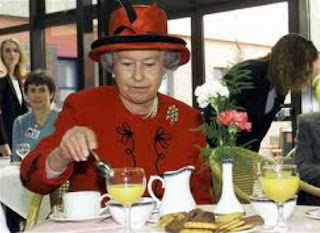 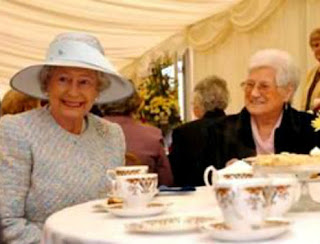 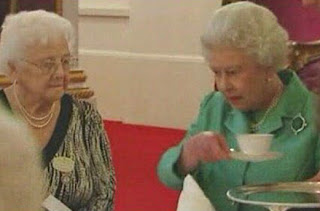 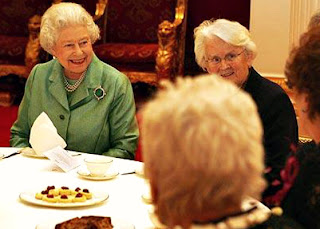 The Queen sat down to tea with couples celebrating their 60th Wedding Anniversary during her Diamond Jubilee tour of Britain in May 2012. 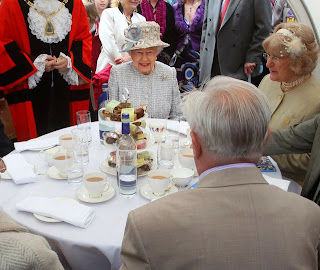 With tea in hand, the Queen inspects a decorated Indonesian sword on display from the Royal Collection during the Indonesian State Banquet at Buckingham Palace, March 2013. 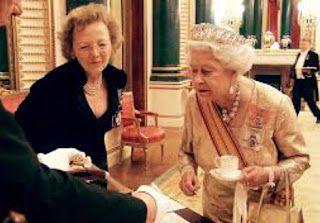 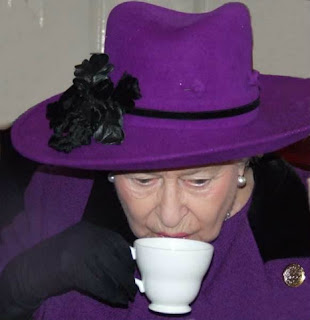 The Queen enjoying a cup of tea at a reception for the World Cup Winning Team at Buckingham Palace. 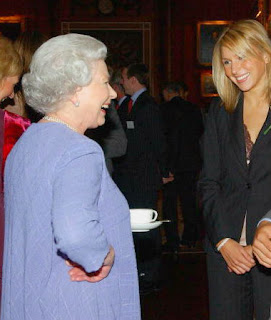 The last three photos are "spoofs."  The Queen's beloved corgies don't share her bed while she has her morning tea tray. 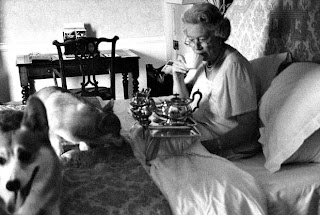 In 2012 to celebrate the Queen's 60 years on the throne, Tetley Tea had 60 handmade,  60-cup street party tea bags made.   To launch their Diamond Jubilee tea bag, a look-alike of Her Royal Highness gives the jumbo tea bag the royal seal of approval. 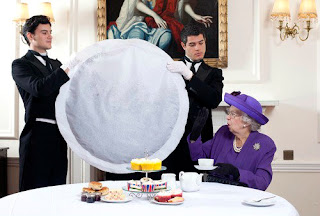 In the last photo, the Queen's look-alike is using her Royal Guard's Bearskin hat as an urn with a spigot to make sure her royal brew can be topped up at all times. 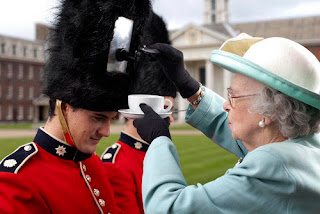 Here are a couple of tidbits about the Queen and tea:


God Save the Queen, and long may she reign!

Today I'm linking to Bernideen's Tea Time Blog for "Tea in the Garden."

Email ThisBlogThis!Share to TwitterShare to FacebookShare to Pinterest
Labels: Queen Elizabeth II and the 60th Anniversary of her Coronation.