Weekend with the Grands

Jeremy and Samantha [our youngest son and daughter-in-law] left yesterday for a Mediterranean Cruise in celebration of their 40th birthdays.  We [mainly my hubby since I have to work most of the week] are watching the grands this week and their maternal grandparents will watch them next week.  I went out with my hubby yesterday morning, but I drove separately and returned home tonight.

They live in a wooded area, and the photos below show the contrast between a few weeks weatherwise.  I much prefer photo #1, but Michigan definitely experiences all four seasons. Photo #2 was taken yesterday. 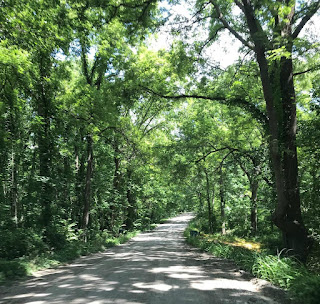 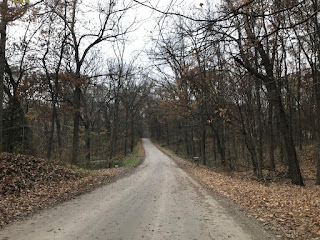 Tomorrow the landscape will change again as most of southeastern Michigan is under a winter weather advisory with our first substantial snowfall occurring tonight and tomorrow [3-5 inches]. We awoke to a mild snow last Thursday, but it melted quickly.  This snowfall will officially kick-off the winter season.

Two deer [both does] meandered around Jeremy's backyard while I was eating breakfast this morning and I watched them through the window.  On Friday deer hunters will have their rifles ready to shoot them when hunting season opens.

Saturday was relatively quiet as Landon was at a Michigan State football game with a friend, and Izzy was at a church teen retreat.  Ellie had Papa all to herself to play games. 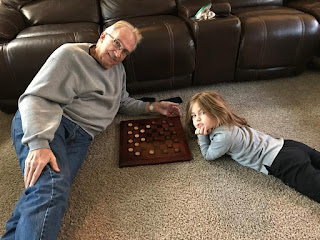 Jeremy and Sam's first flight took them to Amsterdam and a second one to Rome.  They spent today in Rome and will be there again tomorrow before their cruise officially begins.  I asked Jeremy to keep an eye open for Babingtons tearoom in Rome before he left, and he said he would.  Below is a pic Jeremy texted from the airplane just before they took off from Detroit Metro Airport. 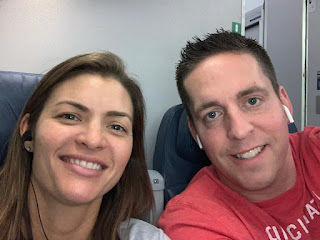 This afternoon he sent a picture of Samantha standing by the front door of Babingtons.  He said the tearoom is about 15 minutes from their hotel.  He called to see what kind of tea I wanted him to bring back.  He read the 7 teas of Rome that Babingtons offers and I chose #5 - Roman Holidays. It's a black tea with the following description:  Romantic, elegant, soft.  An extraordinary blend of 7 black teas from India, Sri Lanka, and China scented naturally with rose and vanilla to celebrate Piazza di Spagna, the most beautiful piazza in the world where Babingtons was opened in 1893.  I can hardly wait to try it. 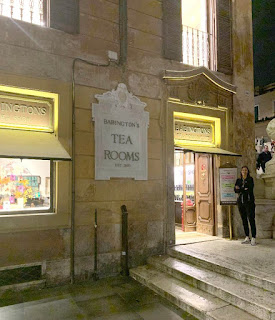 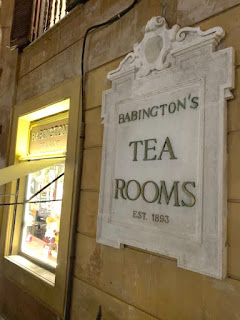 Now I'm anxious to read all about Babingtons.  Imagine a tearoom 126 years old.  If those walls could talk!

Posted by relevanttealeaf at 8:23 PM

Email ThisBlogThis!Share to TwitterShare to FacebookShare to Pinterest
Labels: Babingtons in Rome