When I was hired at The Whitney on August 27, 2018 [and began work a few days later on September 5] it was a dream come true.  I had aspirations of becoming their Tea Director for eleven years before it finally happened.  While I love making and serving tea to the guests everyday and chatting with them, I've also dreamed about planning special event teas in the great mansion.  What better special event tea could there be than a Downton Abbey tea!  I was so happy when permission was granted for the tea, and even happier when the date went up on the restaurant website and Facebook page last Friday.

For local readers, go to The Whitney website for details and to make your reservation [www.thewhitney.com/] or call the restaurant at [313] 832-5700.  They have capped the event at 30 so don't delay.  Below is the poster that's displayed in the Grand Hall. 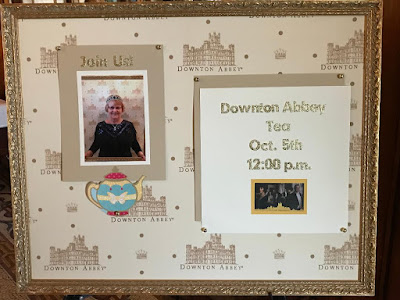 I don't normally work on Saturdays, but they had an Apples and Autumn tea at noon yesterday [part of City Fest], so I went in to make three types of tea, all containing apple cider.

The tea began with Sparkling Apple Pie served in a champagne flute.  It was a combination of concentrated apple cider, caramel sauce, chai tea and champagne.

The tea with dessert [baked apples slices and ice cream in a pastry tart] was chai tea made with apple cider and rum.  I wish I would have thought to take pictures of the food courses, but with all the busyness it slipped my mind.

Below are the two male servers for yesterday's 16 guests.  I trained Steve [on the left] to prepare the tea on the weekends when I'm not there.  Mary Jones [center] blends all the teas for The Whitney, and she sells her other blends at Detroit's nearby Eastern Market.  She hosted the Autumn & Apples tea.  Ricco is on the right. 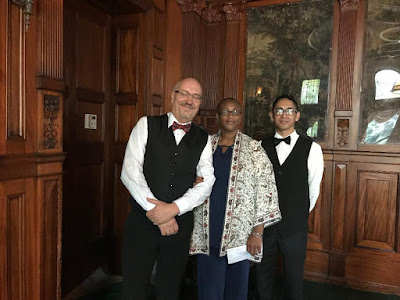 ~ The Autumn & Apples tablescape in the formal dining room. ~ 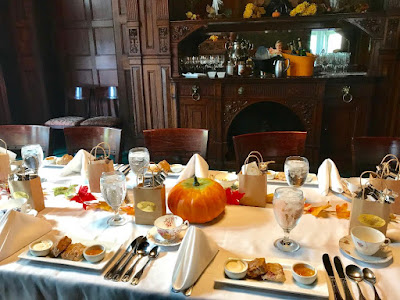 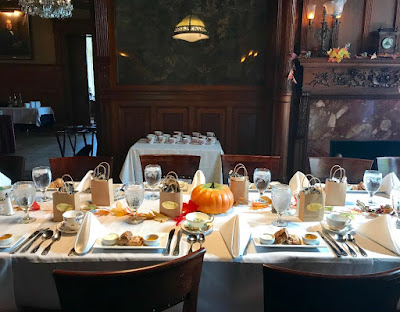 Simultaneously, the Saturday Brunch was in progress in the Grand Hall and a Bridal Shower in the Receiving Room.  You can see the formal dining room through the large opening on the right.  The opening to the left is the library. 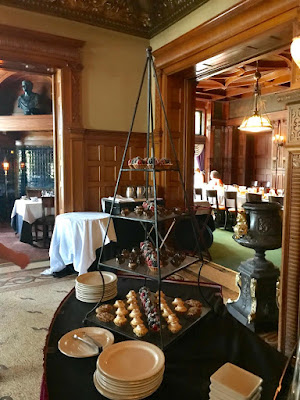 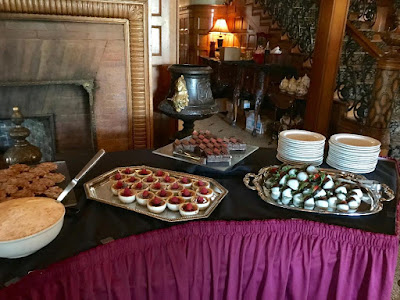 I thought I was going home right after the Autumn & Apples tea, but was asked to stay on through the 2:00 o'clock Afternoon Tea.  My spirit was willing to work 6 1/2 hours non-stop, but my feet weren't too happy!  ;-)

Did you watch the NBC special 'Return to Downton Abbey - A Grand Event' last Thursday?  I did.  If you missed it, you can still watch it at NBC's website.  I just finished watching it a second time. 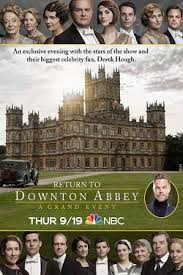 I've been having fun getting out some of my Downton Abbey memorabilia.  The teacup is from my 2015 visit to Highclere Castle which you can read about here, and the mug is from my visit to Byfleet Manor, the house that was used as Dowager House.  You can read about that Afternoon Tea visit here. I hope to see you at The Whitney's Downton Tea.  Please make sure to speak to me.

Posted by relevanttealeaf at 4:49 PM

Email ThisBlogThis!Share to TwitterShare to FacebookShare to Pinterest
Labels: Downton Abbey Tea at the Whitney