The day kind of snuck up on Jerry and me this year.  I didn't realize its arrival until I went to the grocery store yesterday [Friday] and saw the floral displays.  Jerry's a fan of dark chocolate so I got him Sea Salt Almond Bark and Sea Salt Caramels.  He got me flowers. 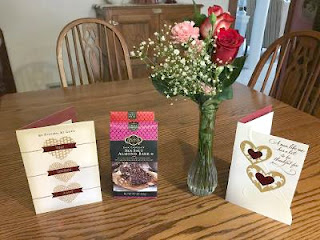 It was busy at The Whitney today.  We served 39 for Afternoon Tea, and they had many dinner reservations for Sweetest Day.

I was curious about the origin of Sweetest Day, so I looked it up.  It is not a second Valentine's Day. It began in Cleveland, Ohio in 1922 when Herbert Birch Kingston decided to bring a little happiness into the lives of orphans, shut-ins and others who were often forgotten.  With the help of friends, he distributed candy and small gifts to Cleveland's underprivileged.

American Greeting Card Co. said people from Northeast Ohio have been taking the holiday with them when they move to other parts of the country, but Ohio is still the top state for Sweetest Day sales, followed by Michigan and Illinois.  Texas, California and Florida are also among the top ten.  It is always celebrated on the third Saturday in October.  [Incidentally, Boss's Day preceded it by one day on Oct. 16th.]

My Aunt's grandson drove up from Nashville, Tennessee area to spend some time with her this week.  He'll be going home tomorrow, but he posted this beautiful picture on Facebook holding his Nannie's hand.  It just seemed appropriate for Sweetest Day. 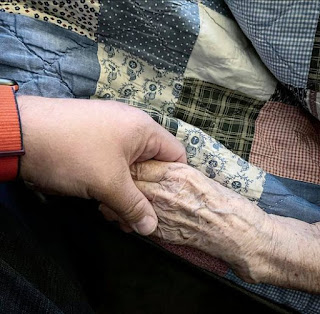 Posted by relevanttealeaf at 8:18 PM

© 2012-2020 Phyllis Barkey
Text and images may not be used or distributed without permission of the author.